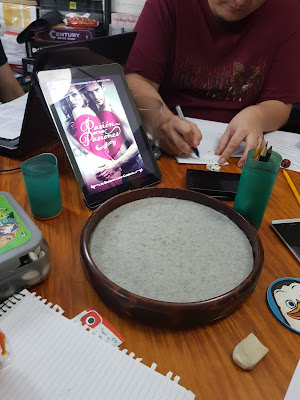 We're crazily playing a telenovela-themed game called Passion De Las Pasiones, another clever RPG powered by the Apocalyse. We have a different group of players at the table versus our normal and the resulting mix is pretty interesting. It's always sort of amazing how different RPGs can be and the many different niches they try to explore.

Today is also the day that Tobie was able to pick up a Balikbayan from Tobie's brother that had arrived. Guiltily, the box was pretty much just our stuff (versus how normally it's a mix of items for other members of Tobie's family), and that means a mix of board games, Star Trek Starships, LEGO Dimensions figures, RPG books, and other Kickstarter rewards.

So the game collection has jumped to 327 titles (mainly because of a lot of mini-expansions) and we have a heck of a lot of games to try out, hopefully sometime soon. It's just a question finding the time to both learn and play these games to make the most of our collection. But it's part of the fun of the tabletop gaming hobby.