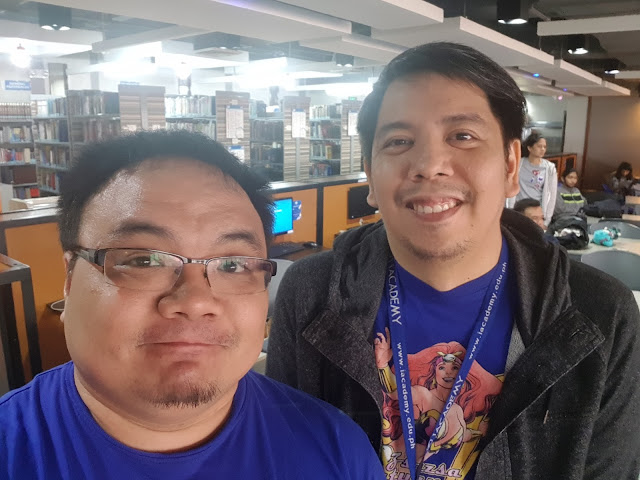 This weekend is the #Conclave2018 D&D convention and Tobie was invited to be a speaker. As the guy who tries to keep his TAG Sessions Facebook Page updated, I made sure to go along to add some event coverage posts to the page in the absence of other content. And given my recent focus on video, I wanted to see what we could come up with.

This isn't the first time that Tobie has been invited to speak at a gaming event. In fact, today's talks were actually ones he had done before and had been requested specifically for this event. But given this, I wanted to take the opportunity to try to record his talks for future record as it seems waste not to have them on file. But I wasn't confident about having enough memory on my phone to capture the whole thing, so I figured a live video broadcast would be the best option.

That led me to two main options - Facebook Live and YouTube Live. Facebook was the no-brainer as we could run it directly frrom Tobie's Facebook Page and keep that engagement attributed to it. YouTube is obviously a platform I'm trying to make the most of as of late but it would be tagged to me instead of Tobie, which didn't sense from a branding perspective.  So I went with Facebook and thankfully the Globe data signal at iAcademy wasn't too bad.

The other big challenge is the fact that I still don't have a tripod for some reason. Desite all my efforts to document events and take videos at O Bar, I have yet to invest in anything to aid in such efforts. I'm thinking that one of those Gorilla pod style tripods would be great for day-to-day use and possible using my phone to record gaming sessions at home. But for O Bar it doesn't quite make as much sense given the crowds and maybe an easier-to-manipulate monopod would be more practical. And given my shift away from point-and-shoot cameras, something that will support my Samsung S8 seems more prudent.

But back to the main topic, I'd like to think the talks went well even though the audience may not have been quite as ideal given it was a D&D focused event. But there were a fews who approached Tobie with additional questions and comments after his time was up and that feels like a good sign.