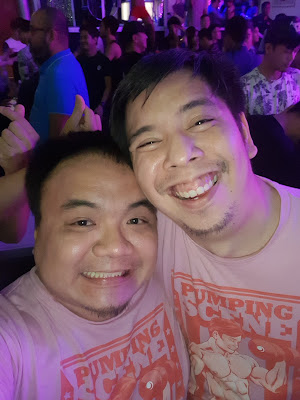 So last night at O Bar was crazy fun and I'm super appreciative for all the friends who joined us. We had some first-timers and of course the usual suspects that we drag along and it seems safe to say that everyone had a good time. The drag performances were their usual mix of hilarious numbers and seriously jaw-droppingly amazing ones, but that's O Bar for you.

I'll never understand why more people don't patronize the bar given all they're missing out on.

While our celebrations were not exactly the sort you'd associate with the Chinese Lunar New Year, but it's not like we were aiming for that precisely. We just wanted to have good time.

I had more alcohol than normal, but I suppose that was to be expected given the holiday and thus more license to let loose. It hasn't quite helped me be productive today, but Tobie did help orchestrate things such that I could still get in a quick yoga workout before today's gaming.

Learning: yoga does not cure hangover, but it sort of helps you focus a wee bit more, even if just momentarily.

What was interesting beyond our on-going 7th Sea game was our experience trying out one of the Exit the Room games. They're essentially an escape room experience captured in a tabletop experience, and thus can feel a lot cheaper than an actual escape room but a little pricey as a board game as it's a one-time game experience, depending on your perspective on things.

The game itself was very well designed and crazy clever. We started feeling confident that we'd be able to finish the game within  an hour for top scores but in the end struggled through the game for nearly two. But at least we escaped the Pharoah's tomb with our lives intact. There was no saving the ice cream though.
gaming O Bar queer life sietch life tabletop gaming Tobie