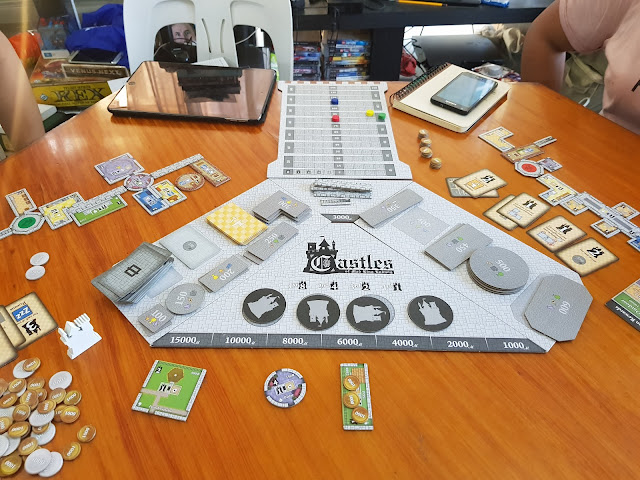 We had two big board game nights this weekend and that allowed us to cycle through a lot off different games and that makes me happy on a number of levels. Of course it's fun to just play games for the sake of  it, but I also derive some pleasure from just tracking the game plays as well via the Board Game Geek app. And it's this tracking which helped me create my recent blog post about gaming stats.

The are two stats that sort of drive me nuts and help inspire more diverse gaming. One is the Game H-index, as I mentioned in that prior post. This tracks of how often you play different games in your collection and more games played more ties helps to incrase this rating. Updates to our game plays has pushed us to an H-index rating of 16, which means at least 16 of our games have been played at least 16 times, which is pretty interesting.

The other stat actually looks at players and I was surprised to note today that we had just pushed our Player H-index to 24, which by the same virture means that we've played with 24 different people at least 24 times across different game sessions. That feels oddly impressive - it means that Tobie and I have continually put efforts into gaming with more people on a repeat basis.

Thus our regular game nights continue to drive us to play more games in our collection with more people. It's a weird goal and a sometimes daunting one as we continue to purchase new games, thus increasing the size of our collection even more.

BGG has a few more stats of interest that I don't toally understand. One is the Friendless metric, which compares games that you've played at least 10 times veruss the size of your collection. A negative rating indicates that most of your collection hasn't been touched all that much. Our current rating is...2. That doesn't sound all that great. They also compute a utilization rating for one's collection (main sets only) and ours is 61.7%, which sounds better but again is hard to say. There's a last Continuous Friendless Metric,, which I really don't understand, and our current rating is 4.17 and this relates to how many games we play on average. I guess that could be better.

It's not easy since there are only so many games that we can play in a single game session and there's the quirk that games we enjoy more get played a lot more. Thus our copies of games like Cosmic Encounters and Doctor Who: Risk remain  largely unplayed versus the rest of the collection. But we remain fairly certain that we'll eventually get around to playing them again some day and thus we don't feel like selling them either.
gaming sietch life tabletop gaming