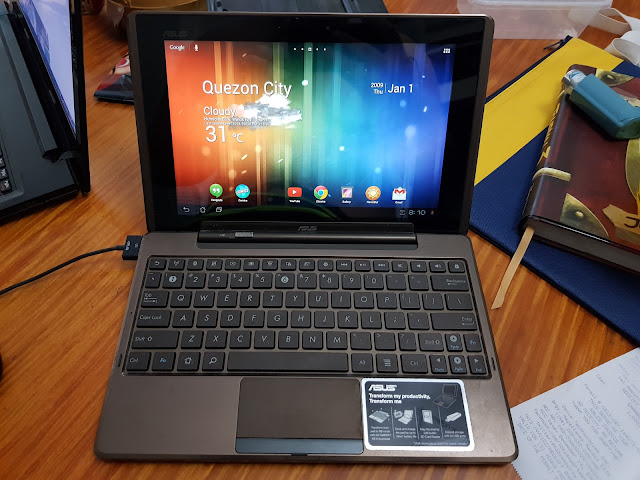 A few friends had recently been asking around for computers that they could borrow for this or that purpose and that had me thinking about our own collection of older devices. We were never very good at disposing old tech and every new computer was purchased out of necessity but not yet at the point of the old device having stopped being useful. And thus there's an odd collection of still-working yet outdated devices hidden around the Sietch.

And yes, we did bring them along with us when we moved from Cubao to BGC last year.

With Tobie off to visit his folks, I have managed to reassemble my old ASUS EEE Pad Transformer TF101 from a time when I was still into the ASUS EEE line of netbooks and related small laptops. It has seemed cool at the time since it was the first of its line and acted as both a tablet and a pseudo netbook given its accompanying keyboard dock that also acted as an extra battery. But it quickly fell out of favor since (1) I realized I was still more of a desktop person than a tablet person and (2), ASUS never bothered to help the device get any updates past Android 4.0.3 Ice Cream Sandwich. So yes, this is an Android table that can still support Flash.

The device functioned decently as a tablet but never really scratched the itch of serving as an alternate computer for blogging. The fact that software updates stopped in 2011 sort of forced my hand into getting an actual laptop later on.

The tablet unlocked shortly after charging and provided an odd snapshot into my past. The tablet still had games like Triple Town, Robotek, and Plague Inc. and a much older version of the comiXology app. I'm trying to let Google Play run updates on the device now but we'll see what apps can still function. If I can get maybe the Google Drive/Suite apps running and a decent PDF viewer, then this device may still have some use yet. But I don't think it's the sort of device that I'd be comfortable lending out given the state it's in. But we'll see how things go.

I still have a full ASUS EEE Pad somewhere here and my last i5 computer before this work laptop. I really need to figure out what to do with these dinosaurs.
gadgetry sietch life technology