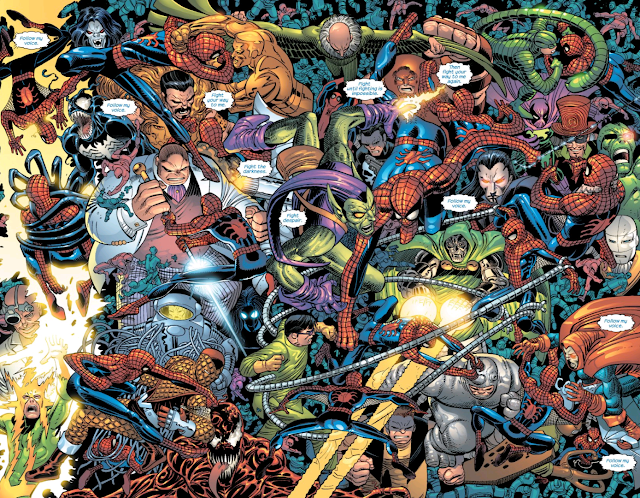 Many years ago the Spider-Man Clone Saga happened and the resulting implications of that story actually got me to quick reading Spider-Man comics entirely. I'd come back maybe for the major events but for a long time  I had avoided reading his stories entirely.

I started to come back because of Dan Slott's Spider-Verse event, that pulled in a crazy number of Spider-related people into a single story. And now a series of Spider-Man related sales on comiXology has allowed me to amass quite a number of Spider-Man comics again. I focused first on the more recent stuff and the very old pre-Clone Saga stuff, but over time I've really starte to fill-in the gaps.

My current comiXology reading has focused on J. Michael Straczynski run on Amazing Spider-Man, which is a period I totally missed out during my big Spider-Man boycott. His spin on things started on a weird note with Peter Parker and Mary Jane on an odd separation that left him mostly alone to deal with a possible mysterical origin for his spider powers. The mysticism of his "totemic power" was a plot point that Slott continued during this Spider-Man comics, so it's interesting to explore its origins to some degree.

It's a weird journey as the major direction or the comic is rather different from many of the ones before. Sure, the core elements are there like how Spider-Man constantly watches out for civilians in harm's way or how enemies repeatedly try to use his friends and family as possible leverage to use against him. But on the flip side there's also the decision to have Aunt May find out about Peter being Spider-Man fairly early in the series and how she tries to cope with this knowledge does make for interesting reading.

Not sure how I feel about all the mysticism as it still sounds like a crazy gimmick to make something old sort of new again. But I can see how it pans out given the later books so it's not entirely far-fetched.
books comics Spider-Man