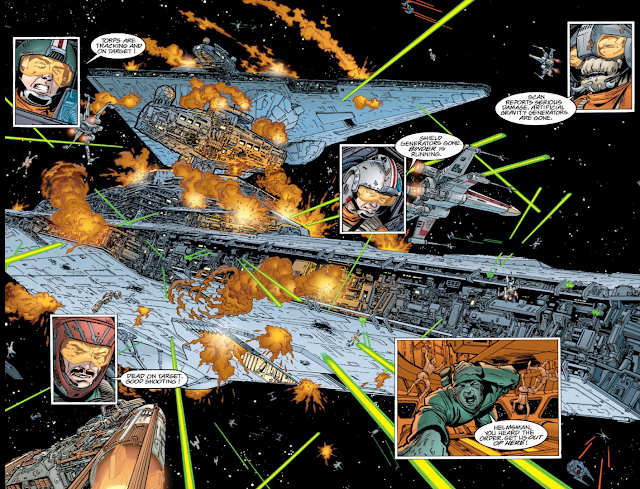 My initial entry into the old Star Wars Expanded Universe (now the Legends part of the franchise) was actually the Star Wars: X-Wing series of novels as initially written by Michael A. Stackpole. I had followed him from his work on the Battletech novels and figured I could trust in him for a good story and was not disappointed. The novels were rather captivating given the colorful nature of the Rogues and the vivid space battles that Stackpole brought to life on the page.

As much as I'll always love Star Trek more than Star Wars in terms of political setting and the sort of stories the frachise focuses on, the X-Wing books nicely capture what has drawn me to Star Wars the most - the big space battles. There's just something about the odd combination of air force and naval combat applies to a fictional space setting that has always worked for me. And it's somewhat ironic as the original trilogy of movies that we all grew up with didnt quite have as much combat as you'd think. The books and other parts of the expanded universe really built on things and fleshed out that part of the fictional universe.

I wax nostalgic about all this now as I've just finished reading the three omnibus volumes of the Rogue Squadron comics as some of my first big comic reads for the year. The story was rather different from the books but still similar in tone given Stackpole's involvement. He just had a largely different set of characters and the Rogues involved in different engagements from what they had faced in the books. But I can see how the two stories still work together despite the nuanced differences as the squadron has always been notorious for high turnover given the high risk missions they tend to undertake.