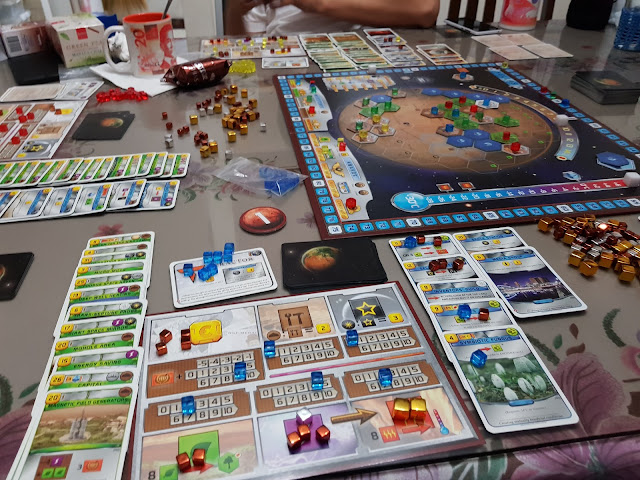 Plans to step out to watch Ang Larawan before tonight's game night fizzled out since Tobie and I had stayed up all night to finish the new fourth season of Black Mirror. Totally worth it since I'm fairly sure the movie will remain in theaters a bit longer as it did win Best Picture at the MMFF.

Instead we set one more board game night with good friends to make the most of things. With all things being equal we'll most likely agree to a game night as we're totally geeky that way. We kicked things off with a Terraforming Mars expansion game as longer games like this should go first.

Tomorrow we don't have firm plans apart from going to O Bar after the New Year's Eve fireworks have abated. I even have bottles of Rosé at home but we didn't find people to have over, which is actually typical. I'm not sure what drove me to get the wine apart from hitting the minimum for free delivery on Honestbee. But who knows, maybe a friend will come along in search of a place to celebrate. Both the geek and LGBT communities have more than their fair share of holiday "orphans".
gaming holidays O Bar tabletop gaming television Tobie