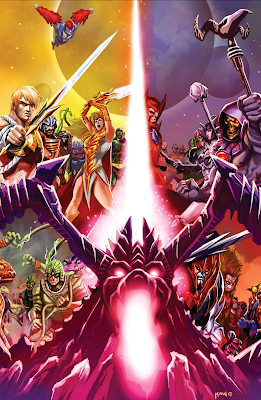 As is often the case when I fall "victim" to comiXology's many, many sales, I found myself with copies of the DC effort to retell the stories of He-Man and the Masters of the Universe. I wasn't sure what to expect but I was initially curious because of the great cover art and the fact that Dan Abnett had done "scripting" for the books.

I went through the entire run and finished reading Eternity War today and MAN that was a fun series. It was dark and edgy with more of a "modern" comic book feel and yet it didn't shy away from it's colorful history. It was clearly a labor of love with a lot of heart in it and a surprising number of referenes woven into things.

On the other hand, they also managed to weave together disparate elements of Masters of the Universe mythos to create a largely all-encompasing universe. And I'm talking about the differences between the various cartoon incarnations of the franchise along with the inconsistencies between the mini-comics that were included with the toys themselves. But the resulting meta-plot ended up being quite masterful that I enjoyed the entire run a lot more than I had expected to.

Beautiful art, a great story and childhood nostalgia all came together into something quite epic indeed. Totally worth buying, even if at a discount.

Now to explore a bunch of these Star Wars comics I purchased because of the inevitable sale given the showing of The Last Jedi.
books comics