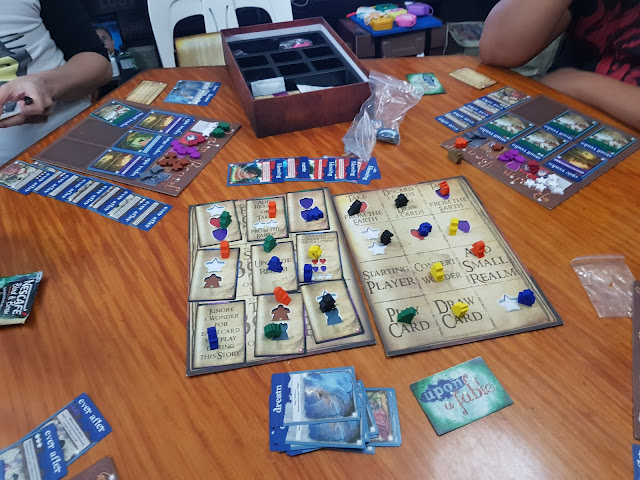 We had a great game night last night and dredged up a nice mix of games to change things up. There's a tendency to get stuck in phases of game obsession, especially with big games like Through the Ages and more recently Terraforming Mars so you start to feel like other members of the game collection are starting to feel neglected. So last night included fun gems like Upon a Fable and Tiny Epic Galaxies. When your board game collection includes about 275 game sets already, then you really have a lot going on.

Oddly enough, my biggest motivator for rotating the games we play is the BoardGameGeek app. It's pretty handy for having once place to track your collection especially when you're shopping and you need to check whether or not you have this or that set. But you can also use the app to track every game you play and who you play them with just to gather more geeky data. And this part of the app has gotten a lot better in recent updates and I've been using it pretty faithfully over the past few years. Game plays factor into a weird score of sorts known as your H-Index, which is really something used more to measure the impact of published works in terms of how often they're cited in other research but it's also being used on the site to measure the impact of games and the diversity of games each user plays. The app automatically determines your score for you as you track games and it's an odd motivator to play more games more frequently in order to push things further.

This just means we need to play more games with more people to continue to spread of our love for gaming and try to get others on board the tabletop wagon.
gaming sietch life tabletop gaming