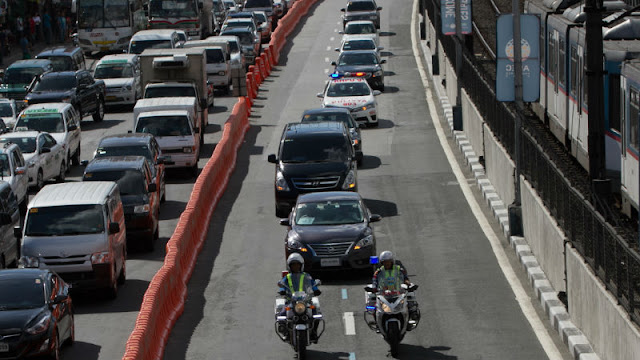 Two years ago the government came up with APEC lanes, a sort of express lane for the use of foreign delegates so they wouldn't have to deal with actual Metro Manila traffic. Given the horrible local traffic situation, it was probably one of the most direct solutions for the problem. It also made for some rather striking imagery of how the government had to create this alternate reality for their VIPs that practically mocked the every day commuters stuck in the even worse traffic that had been aggravated by the APEC lanes.

Next week we'll be hosting the ASEAN Summit and we're going to experience a return of these lanes, now called the ASEAN lanes. Perhaps worse is the fact that a good number of delegates are expected to arrive at Clark Airport up north, thus requiring them to have express road privileges all the way to the CCP area much further south. So we're getting the weird lanes and what they're calling a "lockdown" as they will stop traffic entirely from time to time in order to facilitate the movement of delegates to and from the airport and between their hotels and the summit venues.

It's for a similar reason the government has declared these days to be special non-working days (but not holidays) in order to decongest the roads as best as possible. During APEC our company opted to have everyone work from home in order to still get things done and it appears that we'll have to do that again next week. We still have work as our clients aren't local but we're consider cognizant of the difficulty our people will experience getting to and from work during this summit. So this seems to be the most reasonable course of action that we can take while still keeping up with our business obligations.

Still, this just reminds us all how bad things are in Metro Manila and the crazy lengths that the government needs to stretch to in order to appear halfway functional to the representatives of other countries.
inner ramblings stop the presses work