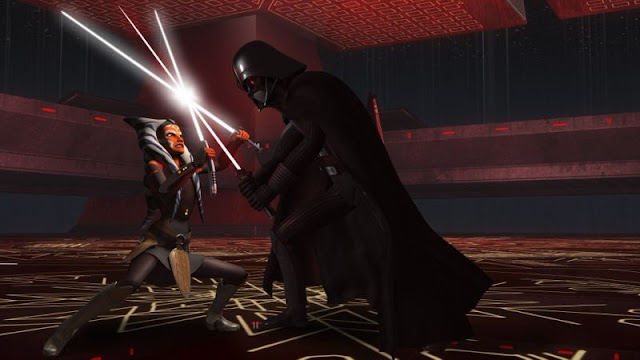 With the premiere of the fourth and final season of Star Wars Rebels just around the corner, I've been re-watching the first three seasons of the show on iflix with much anticipation. Today I just finished the second season again and have once again watched the epic confrontation between Darth Vader and his former padawan Ahsoka Tano. We haven't seen or heard from Ahsoka since that second season finale and it's been one of the bigger questions nagging fans.

Rebels show runner Dave Filoni has been taunting fans repeatedly with "Ahsoka Lives?" and "Ahsoka Lives!" shirts, social media posts where he debunks fan theories that Ahsoka is somehow the giant wolf seen in the Season 4 trailers, and of even little "stories" not captured in the series such as when Ahsoka met the enigmatic Bendu before the confrontation on Malachor. Even tidbit of information has been both exciting and frustrating at the same time.

Ahsoka Tano is an interesting character who once represented everything that was wrong with Star Wars: The Clone Wars when it first debuted as a feature-length animated movie. Ahsoka was somehow a more annoying character than young Anakin had been in Star Wars: Attack of the Clones and was an obvious effort to have the series appeal to younger audiences. But during that series her character's story arc was pretty phenomenal and really peaked during the Season 5 episode "The Wrong Jedi" when Ahsoka leaves the Jedi Order.

Her re-appearance in Rebels as the mysterious Fulcrum was a great cause for celebration as many Clone Wars fans like myself had learned to love and respect the character. Seeing her in Rebels represented her return to the Star Wars canon, just when the Expanded Universe had been limited to Legends and a new Star Wars canon under Disney had been created. It marked many Legends characters and concepts being reintegrated into the new canon through Rebels as culminated with the return of Grand Admiral Thrawn in Season 3. But Ahsoka's continued absence from the show is something that continues to nag at fans as we wonder as to her fate and how she survived her confrontation with Vader.

I do hope Season 4 has some answers for us. In the meantime, I really want to finish my Rebels re-watch and maybe go back to re-watch Star Wars: the Clone Wars in its entirety as well.
Star Wars television