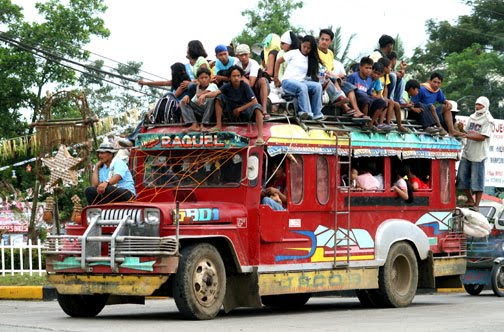 The many transport strikes this year have largely been because of the PUV Modernization Program, that is often being criticized for being anti-poor. On paper, the goals seem laudable as it means imposing greater safety standards on public transportation. However the methodology being applied seems less than idea.

It's bad enough that our public transportation is controlled by private interests and is thus subject to the principles of competition, but jeepneys are even trickier as many of them are owner-operated. And thus the way the new PUV rules try to push larger fleet operators to manage things given the larger price tag for the new electric jeepneys. The government is offering subsidies as loans but even the modest 6% interest rates with 5% equity and 7 years to pay may be too much for smaller jeepney operators to afford. Hence the strikes.

Now I don't think it's practical to continue to coddle the individual jeepney owners and drivers while forsaking progress. However the solutions can be more inclusive. At the same time, I don't think directly nationalizing public transportation, at least in the long term, makes that much sense either. The government has consistently demonstrated its inability to manage things well on its own.

I continue to advocate for the need to take a more sensible approach to regulating routes. Individual private companies should handle individual routes without competitors and should be held to quality standards in terms of adhering to a trip schedule and minimizing break-down periods. In terms of Jeepneys, the government will need to either step in as an interim operator that will directly hire jeepney drivers again for dedicated routes with a plan to bid out contracts to private operators who will take on the drivers as staff or something else along those lines.

Ultimately public transportation needs to be treated as s service and not as a competitive enterprise in order to optimize routes, improve efficiency and curb a lot of the riskier driving that happens in the name of individual drivers trying to reach quotas. The current modernization plan simply forces standards on private entities without really giving them the tools to succeed or equal opportunities to remain in the industry. It becomes a money game where only larger, better funded operators stand a chance to survive the PUV modernization transition with a blanket disregard for the welfare of those who can't afford to keep pace with the program's requirements.
inner ramblings stop the presses