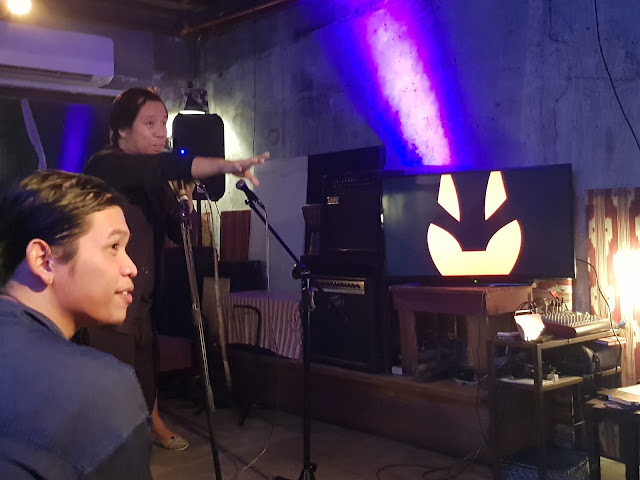 So last night was CRAZY fun. I wasn't sure Tobie and were going to have fun since I know he's not good with singing in front of crowds but it was for Nik's birthday so we had to make the trip despite the rainy weather.

For the most part Tobie and I just sang along without leaving our seats and that was still fun. Nik had limited the night to show tunes and Disney songs, so you know that's a crowd pleaser. And it was a nice gathering of many geek friends that we hadn't seen in a while, so there was a lot of good cheer going around.

Tobie and I ended up staying a lot later than planned and as the guests diminished I felt confident enough (or buzzed enough) to get up on stage. Tobie had requested that someone sing "You Don't Know" from Next to Normal and I ended up taking a stab at it since not many people seemed familiar with it. The song was well beyond my limits and quite vocally challenging, but I was glad to sing it for him. Later I felt more confident singing "Wig in a Box" from Hedwig and the Angry Inch as I knew the song better and it was closer to my range. Plus it was a heck of a lot of fun.

We went home happily buzzed with music still echoing in our heads. Now we're at another monthly board game session with the Finer Gaming Things Club. As it's a Sunday session it won't be as long as we'd like it to be but we'll still have fun. Funnily enough some of the people we were drinking and singing with are part of this gaming session, including yesterday birthday celebrant!
birthdays gaming tabletop gaming