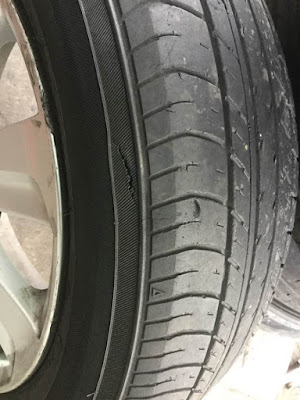 So Tobie and I had stepped out for drinks last night with a few other friends. That part of the night was lovely and we made our way home with big smiles on our faces and music still playing in our heads.

And then while talking during the drive home we hit a pothole hidden in the gloom of Mckinley Road while driving. It was pretty deep and the dip was a little jarring when it happened. And then Tobie felt the car was wrong so we pulled over and stopped to check.

The tire was definitely flat and we were in yet another shadowy part of McKinley road, just a little short of the turn into BGC proper. It became a two-man operation to get the tire changed with Tobie and I alternating between working on the tire and directing cars away to they don't accidentally hit us. We had the little reflector triangle out and everything but you can't be too sure during the wee hours of the morning.

It took a bit to job my memory on how to change the tire but we get everything done eventually. Unfortunately having the hazard blinkers on along with some of the interior lights of the car somewhat discharged the battery and it wouldn't start once we had gotten back in. Around this time some BGC marshals FINALLY showed up (where were they when we were changing the tire?) and the at least arranged for one of their trucks to come over and give us a jump. It took them a while to figure out what they were doing (including a short spell of getting the wires crossed) but then we got the car started and made our way home.

Tobie spent the morning getting the tire checked and the light of day revealed how bad the damage was. Outright replacement was in order so he had to settle that. It was a painful expense but it's scarier to travel without a spare tire.

There's some irony of how a pothole like that persists despite the many rather high value private villages connect to McKinley Road, but it sounds like another of those problems of road jurisdiction in terms of who's supposed to fix it. It was a rather expensive reminder not to take even Makati / BGC roads for granted as there's a lot of crappy stuff out there.
sietch life Tobie