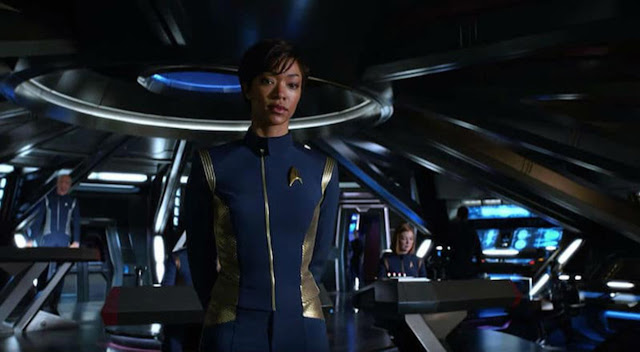 It has been over 12 years since Star Trek: Enterprise ended it's final season. That was the last Star Trek show on television until Star Trek: Discovery debuted today (or last night in the US). I can't deny that it has been long enough for this Trekkie to feel desperate enough to have just about any Star Trek show on TV again, even though this one is actually on the internet via CBS All Access and Netflix. Heck, I was initially banking on The Orville to supply enough of a Star Trek feel to tide me over (and the show is doing better with its second episode in that regard).

We watched the first two episodes of Star Trek Discovery tonight and the show...is not as bad as I had feared. It still feels weird and at times too different from the original Star Trek that I had fallen in love with so long ago. But it's still an interesting show that is certainly a lot more character-focused than any other Star Trek in the sense that it's a show about Michael Burnham (Sonequa Martin-Green) and is meant to be told from her perspective. We'll see how this will play out.

I wasn't blown away by the two-part pilot nor am I overly disappointed by  it either. There's hope for the show, but it's a very different Star Trek experience indeed. I'm still getting used to the drastic redesign of everything about the Klingons and their weird obsession with holograms.