02484: The Arduous Journey to Singapore 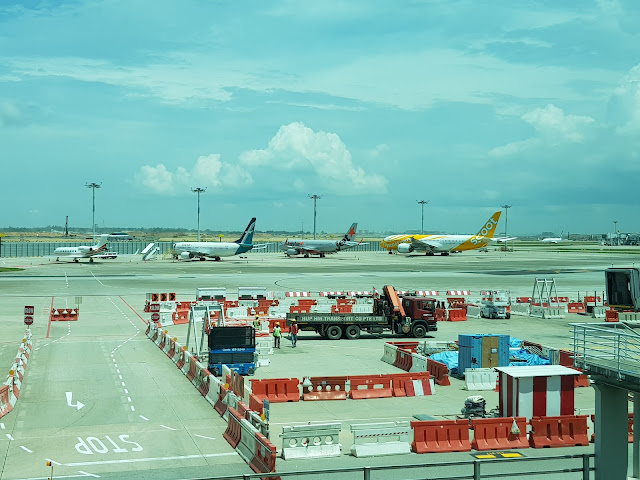 Today was one of the more tiring trips over to Singapore versus a lot of my prior trips. And this is due to a number of factors.

First, the 10:35pm schedule of the flight naturally had me and Tobie planning to buffer a lot of extra time to get to the airport given morning rush hour traffic.While Uber is now back, we didn't trust the network to be fully ready so Tobie had offered to drive me to the airport. We also had to swing by a drug store for some supplies so that inevitably led to us not sleeping all night in order to get my stuff packed and to not be late for my flight.

Then for some reason Jetstar did not open the option for web check-in  for my flight and thus I had to join the regular serpentine queue that was already in the main area of the terminal by the time I had finished up with my travel tax payment. It took  a while to get my back checked in and it didn't help that mid-way one of the check-in counters had to close since the conveyor belt had stopped working.

Next stop, Immigration, but there was only one regular Philippine Passport lane open while 3 OFW and 2 Foreign Passport queues were open. And since there were a LOT of OFW's flying out, it mean waiting in queue for almost an hour as the long officer handled the rest of us. It didn't help that people had weird documents or didn't answer her questions well so I was glad that she only joked about the length of my name before letting me through. Side note: apparently there was some event or somehow had bought food for the Immigration team, and so they were taking turns eating.

By that time, the usual generous buffer we add to all travel was gone and I just grabbed some coffee and went straight to the gate instead of contemplating getting a massage or whatever. I needed to just sit down and relax and so I waited patiently for boarding to begin.

Boarding started a little later than declared on our boarding passes but you can certainly trust Jetstar for their efficiency. We were on the main tarmac in time for our scheduled departure and actually landed at Singapore about 15 minutes early. I had slept through the flight despite my aisle seat and was quick to exit the plane as I had somehow managed to get a seat in Row 2.

Singapore Immigration was busy but not crazily so and a few guys ahead of me had a lot of questions from the Immigration office. That always gets me a little nervous but then when my turn came up he just joked that the guy in queue  behind me supposedly looked like me. I smiled politely at his joke, took my complimentary candy and left as quickly as possible.

At least things were back to their usual efficient nature once in Singapore. My cab ride was largely uneventful apart from the initial struggle of getting the uncle to understand my destination. Then it was time to join the rest of the family here and then get back online to deal with work.

I still haven't slept outside of my nap on the plane but I'll probably kill time on the internet a bit longer before finally hitting the hay.
family inner ramblings run the world