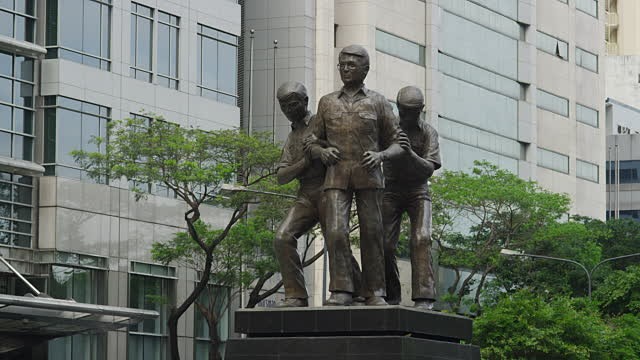 Today is Ninoy Aquino Day, a holiday that commemorates the life of Benigno "Ninoy" Aquino, Jr., once one of the leaders of the opposition against the dictatorial rule off Ferdinand Marcos and his cronies. He died upon returning to the country after years of self-imposed exile. His martyrdom helped spark the fires of revolution in the hearts of many Filipinos, helping set in motion the chain of events that lead to the peaceful Power Power Revolution that ousted the Marcos family from power.

In the 34 years since his death, the world feels like it has been turned upside down. The color yellow was once proudly waved about as the color of that first revolution and a symbol of peaceful resistance against Marcos rule. Now it has been vilified as a color representing corruption being attributed to the Liberal Party and the Aquinos are not being reviled as oligarchs and architects of the downfall of the country somehow. The Marcoses are once again in positions of power and are likely to regain the Presidency within the new term or so. What has happened to this country?

Also happening tonight, protesters have gathered at the People Power Monument to speak out against the violence of President Duterte's war on drugs. Since Duterte has come to power, over 12,000 people have been killed with only a fraction of those deaths having been investigated. Some where supposedly valid deaths during police operations, including the death of 17 year old Kian Loyd Delos Santos who supposedly shot at police while resisting arrest, thus justifying the use of lethal force somehow.

Supporters of the President have been quick to try and change the narrative in the same way that they managed to paint a picture of Aquino corruption and inefficiency. Now Kian is "a new drug runner" identified by the police and all these silly scenarios of "neighbors" claiming  everyone knew Kian was into drugs or even ridiculous demonstrations that it's possible for a right-handed person to end up with a gun in his left hand upon death. These are the same critics who are quickly trying to paint today's protests as more Liberal Party manipulations geared towards keeping the oligarchs in power. It's all crazy talk but since so many voices are saying the same thing over and over, it starts to feel true for some people.

Once upon a time we were all proudly yellow. We threw yellow confetti in the streets and tied yellow ribbons around trees all to show our support for the Aquinos and the freedom from dictatorship and state-sponsored killings that their family represented for a beaten and oppressed nation. The facts remain the facts but political forces have invested a lot of time, effort, and resources into twisting those facts, changing the story, and keeping our former oppressors in positions of power and influence. It's reached a point where even critics of the President still go out of their way to say that their criticism does not represent being yellow or being identified with the Liberal Party because that would be political suicide.

What odd, scary, dark times we live in.
inner ramblings stop the presses