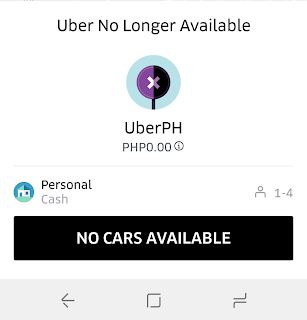 Uber has a mixed reputation around the world. At its core the company offers a pretty novel service but how the company itself is run and how they deal with governments around the world has been less than ideal. The local branch has been fairly decent for the most part but today they made a  rather fatal error.

Yesterday the LTFRB ordered Uber suspended for one month because they continued to accept applications for new drivers even after the LTFRB ordered a stop to such activities back in July. There was some back and forth over this point but yesterday made things final.

As of 06:00am this morning Uber disabled its app in compliance with the suspension order. I figured that they would push their PR efforts to get the public behind them, but that's when they pushed things a little too hard.

It was perfectly fine for them to file a Motion for Reconsideration with the LTFRB. What their mistake was claiming that this allowed them to continue operations once more and thus the app was re-enabled around 10:25am. To make matters worse, they did this while the LTFRB was having a press conference explaining the reasons behind the Uber suspension. News of Uber's defiance just pushed them to reiterate that the suspension order was still in effect and any Uber driver caught taking on passengers would have their vehicle impounded and in theory Uber would be assessed a PHP 120,000 fine.

Uber didn't say much after that, but the LTFRB released a few statements to the media about criticizing Uber's action and the seeming contempt this represented. And really, it was a dick move to continue operations and put their drivers at risk of being apprehended by the MMDA and other groups. And I really didn't think this was a good idea, especially with their motion still up for review.

Thus it came as no surprise when the LTFRB denied Uber's motion at the end of the day. Uber clearly pushed their buttons with the decision to continue operating and killed any chances of winning their motion. And they've been pushing really hard throughout this process so it's clear that the LTFRB wanted to make an example of them.

Sure, it's an unpopular decision and I feel the pain as an Uber user myself. But man they didn't have to take things this far in a weird show of brinksmanship as the LTFRB wasn't going to back down. It probably didn't help that even the Palace released a statement of support for the LTFRB decision in a clear reminder that they weren't going to let the government get pushed around.

The Uber app has been disabled once more and the real pain is going to begin. Today I walked to work as a precautionary measure and it wasn't too bad but I made sure to bring an extra shirt. I'm feeling a bit more tired now having walked to and from work today, but I expect my body to adjust in time.

Welcome to the month without Uber. So much idiocy on all sides today.
health inner ramblings stop the presses work