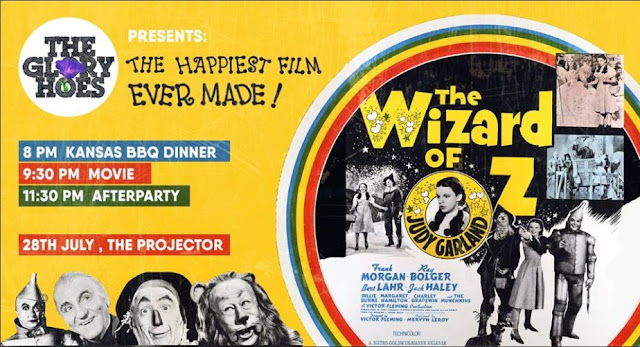 So tonight I've committed to a rather unusual activity - this being a screening of The Wizard of Oz as hosted by a local LGBT group. And while I skipped the Kansas BBQ dinner, I will be there for the movie and the little afterparty. This isn't just a straight up watching of the movie but it's being promoted as a rather roudy, rambunctious screening in the style of how The Rocky Horror Picture Show is aired in the US and other places. So yes, they will be serving alcohol before, during, and after the movie.

Between my trip to Tantric Bar last week and this movie screening for friends of Dorothy, this is the first Singapore trip I've taken in all my years of visiting my sister that includes more than one distinctly LGBT activities. In the past I had wanted to catch events like Pink Dot SG, but we never seem to arrive at the right time. We did at least catch one edition of the Riot! Drag Show featuring some of the personalities behind tonight's Oz screening, hence how I found out about it.

I guess this is part of me trying to make the most of this trip and live a little. We have some wiggle room this time around since I've been here longer and we didn't have quite as many crazy deadlines to juggle including finishing stuff at home late into the wee hours of the morning. This time things have been a bit more manageable, although we've certainly still had our crazy moments.