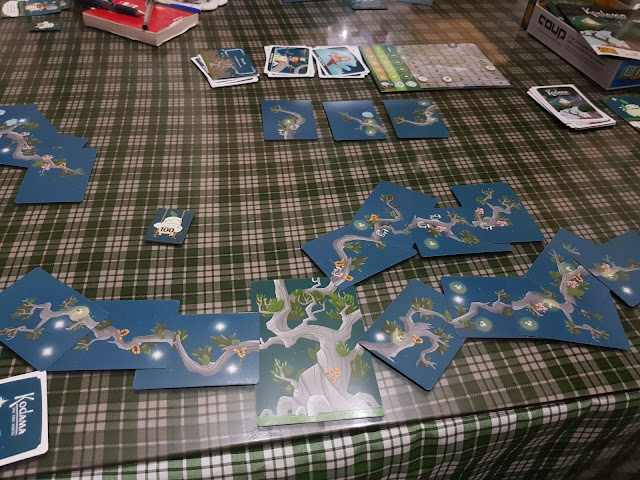 So Saturday was pretty busy ever since Tobie arrived back from his company event and I arose from my hibernation. It was a bit of a trek across the city to get to last night's gaming venue but once there we had a great time.

We're having a lot of fun exploring these relatively quicker, lower barrier Jim Pinto RPGs. Last night we kicked things off with a session of Praxis: Odin's Eye, which had us  portraying the crew of an interstellar starship. It was a pretty trippy adventure involving mysterious alien beacons and almost undead crewmen but on the whole it was a lot of fun. Sure I ended up being left abandoned a planet littered with the bones of a lost alien species but what can you do, right?

We had a fun mix of games for the night after that. We had some bean farming action with Bohnanza. We failed to defeat the mysterious summoner in The Dresden Files Cooperative Card Game. We created some lovely homes for our tree spirits in Kodama. Then we wrapped things up with a round of Legendary: Big Trouble in Little China because why not? Good times of board games and shawarma.

Today we're in the middle of another DC Heroes RPG session at the Sietch. This is my last gaming fix before the Singapore trip next week. Then I'll just have to geek out on my phone or something.