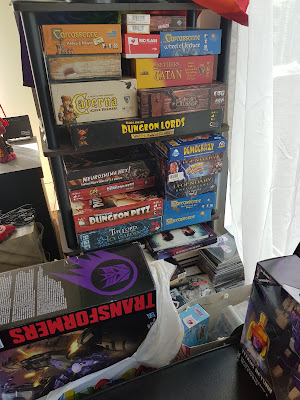 So Wednesday night / Thursday after midnight we got to watch Spider-Man Homecoming and both Tobie and I enjoyed it a lot. It's a pretty fun reboot that skips past the origin story drama and tries to jump straight into the action.

Friday night was another RPG night for our on-going DC Heroes game. Things have escalated for our band of teen heroes and we're dealing with a powerful foe who is along the lines of Cassandra Nova from the X-Men.

Today we're going to be playing board games with the crazy crew of the Finer Gaming Things Club. While we had just gamed with them last week, the quirkiness of our June-July schedules has resulted in gaming two weeks in a row. I'm sure it'll be a lot of fun as always but then it also means that our August game will feel so far, far away.

We'll have to leave the game night earlier (since we usually play until sunrise) as we'll be heading to O Bar around midnight to catch the birthday show of Precious Paula Nicole, one of the O Divas. She's a fabulous drag queen with a passion for some seriously physical performances in terms of dancing and Tobie and I are super proud of all the progress she's made over the years. She asked us to the attend the event several times, so we felt a little obligated to go.

Tomorrow we're catching the  matinee show off the Atlantis staging of Kinky Boots. I've loved the movie for years and I was a little surprised that it got turned into a musical and was even more surprised to see the show become such a success. I haven't seen too many reviews for this local run but I'm pretty optimistic given the talent involved.

And that's our weekend! So much fun to be had, so little time.
all the world's a stage cultural victory gaming moving pictures O Bar queer life tabletop gaming