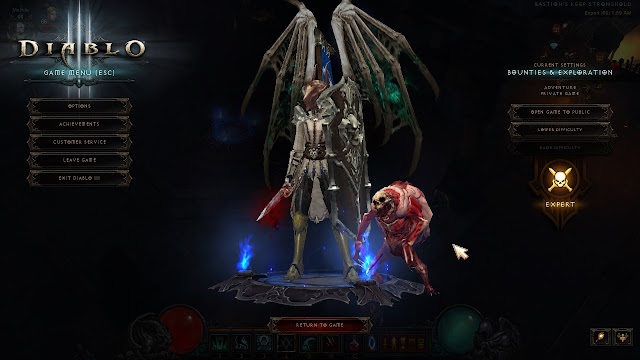 While Diablo III is not my favorite part of the larger Diablo franchise, it's still a solid game that I'm totally happy to play. Lack of better computers for so long had us mostly playing the game on PS3 for the past few years but with the Rise of the Necromancer expansion I forced us to go full PC so we could play the DLC. That's how we geek hard people.

My Diablo experience has almost always been a social one - I first tried out the game via LAN multiplayer with my family - as in literally my dad and my siblings. I was admittedly a little too scared to play the game in Single Player mode and so focused  on multiplayer with my first Rogue.

So now I'm in that all excited mode where I'm actually researching character builds, watching videos about possible end game strategies, and digging through different wiki sites for more information. It's a good time of nerd research skills being applied to a geeky pursuit and I'm enjoying. I just wish Tobie's computer could better handle the game.
Diablo gaming sietch life tabletop gaming