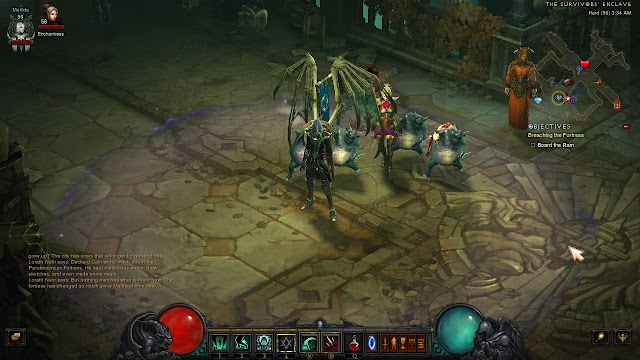 Ladies and gentlemen, I'm really enjoying the Diablo 3 Necromancer! The character class feels a little over-powered but we'll really put that to the test once I get to Level 70 and really enter true end game combat. I'm still playing through the Story mode since we only got our PC copies of the game recently - prior to this Tobie and I were mostly played on the PS3.

The only hiccup is that Tobie's computer is struggling to keep up with the game and it tends to shut down due to overheating mid-game. We're hoping that it's something that a little maintenance can resolve but it's a very real possibility that perhaps it's just time for a new computer, period. We've had a few runs together although limited by his computer's heat handling but I've largely continued on in the game for now.

Diablo 3 is pretty fun on its own but it's more fun in a party. Or maybe that's just how I feel since I first got to know the game through LAN play and not so much solo story mode back when we used to have a computer rental shop. Oh man, that was a crazy fun experience that was literally life-defining for geeky me. No regrets there at all.

I'm going to try to squeeze in some game time before Tobie and I join his office mates to watch a midnight screening of Spider-Man Homecoming.
computer gaming Diablo gaming sietch life Tobie