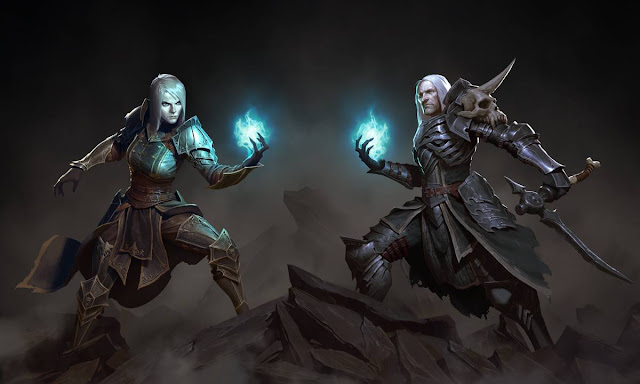 When Diablo first came out, I used a Rogue as my primary character as I enjoyed her dexterity build and her balance between physical damage and magical abilities. Then came Diablo II and while I did had a lot of love for the Amazon, which was the spiritual successor of the Rogue, I really fell hard for the Necromancer. I enjoyed having a little skeleton army even though it wasn't quite the most effective strategy in higher levels of the game.

Come Diablo III there was no direct equivalent to the Necromancer although the Witch Doctor did come rather close with his pets and focus on poison spells. But it wasn't quite the same who doesn't want to deal with blood and bone, right?

So I was pretty excited when they had announced the new Rise of the Necromancer pack for Diablo III as a way to bring the iconic character back to the game. The pack just went live this week and I went ahead and purchased it for both me and Tobie so we could play together. And while it has been frustrating that Tobie's computer seems to overheat when running Diablo, I think it's fair to say that we've both enjoying the damage potential of the character and the quirky set of skills they've given him.

He's not quite the Necromancer we use to love and he has some great new twists to old ideas along with some strange changes to the character. The fact that the Witch Doctor already has the rights to poison spells, the Necromancer now has a lot of "blight" related abilities that seem to do the same thing. But they also made his summons a lot easier and not so corpse dependent.