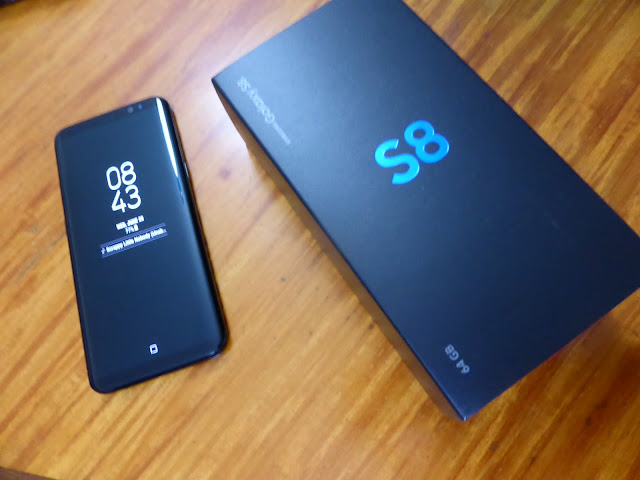 Surprise, surprise! My Samsung S8 that I ordered through Globe arrived a day early. How crazy is that? Given the mixed reputation that Globe's customer service has established over the years, it's easy to underestimate them despite them being a pretty big company by now. And so today was quite the genuine surprise and a most timely one.

Last night, I had resigned myself to the death of my Nexus 6P. Despite my best efforts to try and charge the device by delicately balancing it at an angle that applies modest but steady pressure on the charging cable still wasn't enough to compensate for the crazy battery drain problem. I had already migrated essential functions like the Uber app to my Singapore-centric HTC One but forgot to reconfigure my morning alarms, so I was late for work and my Nexus was drained again since the alarm vibrations disrupted by balanced charging setup.

Once a work, I re-rigged my charging configuration in order to check for SMS updates. Then lo and behold, I had a message from an anonymous number claiming to be my Globe delivery man who was already in the area and open to dropping off the new phone today instead of tomorrow. As I was hastily composing a reply he actually called and I have no idea how my Nexus managed to maintain a charge long enough to handle that. But we agreed to the delivery and he was at the building in 5 minutes. He had mentioned that he had tried to call me earlier in the morning but the phone was out of coverage area so that was around the time my alarms had killed my phone, I guess.

The phone came with a new SIM set with my number but I still have to wait for activation. In the meantime I set the phone to apply all relevant software updates and get my regular apps installed and configured. My old SIM is still active in the Nexus and I'm wondering if I should temporarily move it to the S8 as well just to stay connected. For now the S8 is pretty much WiFi focused, but it's just as well since I'm still re-downloading stuff - mostly digital comics. But by tomorrow I'll probably load it into the second slot as who knows how long SIM activation will take. The first Globe rep I called said 1 hour or so but the second agent said 24-48 hours.