02442: LGBT Pride Across Metro Manila and the Philppines 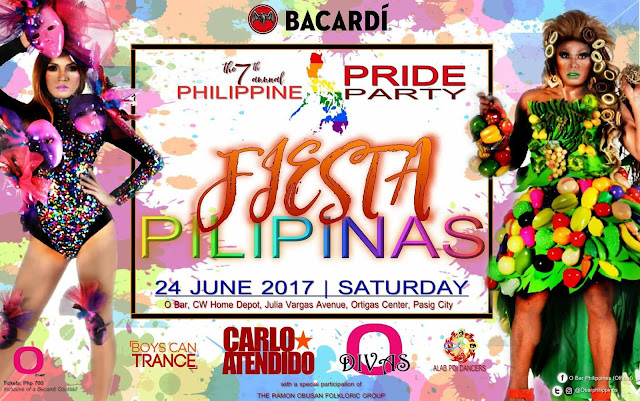 In a few hours Tobie and I will be at O Bar for this year's Fiesta Pilipinas Pride Party featuring even more fabulous numbers from the O Divas and special performances by the Alab Poi Dancecrs and the O Ledge Dancers and a whole lot more. The annual party has gotten bigger and bigger over the years and it's always a delight to celebrate LGBT Pride among good friends with some of the best live entertainment in Metro Manila.

The O Bar Pride Party is but one of many LGBT Pride celebrations this weekend among such peers as the Metro Manila Pride March (held in Marikina this year) and the Pride parties of other LGBT-friendly bars around the metropolis. It's nice to see how LGBT Pride has expanded from a single protest demonstration to a diverse number of other celebrations and festivities pretty much across the country to some extent.

LGBT Pride is always going to be a celebration of who we are in the LGBT community and a reminder of the struggles that have come before to get to where we are now. There's still a lot of work to do in order to advance the cause of LGBT rights in the country including anti-discrimination laws, gay marriage, full recognition of transgender people and so much more. And every act of representation for the community is in its own way a reminder to the rest of the country how we are very much real and here to stay. And we deserve truly equal treatment in the eyes of the law.

While I do regret not being able to participate in the Pride March this year, it has great to read about everyone else's experiences today as a good number of folks in my social media circles participated in the march for the first time today. Sure, there's a somewhat bitter part of me that feels like "Why didn't you march when we invited you to join us?" and things like that, but that's not the point. The Pride March and any other LGBT Pride celebration is bigger than any individual as it is something that we do for the community and perhaps for ourselves as individuals. So I do my best to quash those feelings and focus on the fact that more people have decided to stand up and be counted and this is something to be celebrated.

The LGBT Pride is a celebration of love above all else amid the hate and discrimination the community often receives because of who we are. It is a fight that remains grounded in love and the hope that things can and will get better in time.