0243E: Kitchen Innovations or Free Styling at the Stove 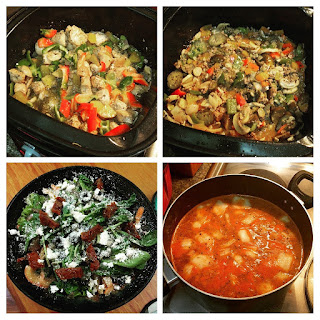 A friend calls it "maskipaps" - a portmandeau for "maskipapaano".  Dishes that don't necessarily follow a particular recipe but just involve innovating with whatever you have in the fridge and such. Sometimes these are recipes of necessity, such as when my sister would gather all the aging greens in the fridge and end up with a default "vegetable surprise" dish. Sometimes you just like how certain things go together and thus so many of my dishes involve lots of onions and garlic and perhaps mushrooms if they fit the mix of things.

I've mostly played around with this mix when I make different pasta dishes. I have a sort of default preparation mix that I start with and then I can shift into a white sauce, a red sauce or an oil-based sauce of sorts. And then I add ingredients as needed and the process repeats over and over again.Thus most of my pasta dishes almost always have mushrooms and meat becomes optional. But I don't steer too far away from either canned tuna, ground meat or even sardines as supplementary protein. Otherwise I go greener with a mix of various mushrooms and eggplants.

I'm playing around with eggplants more this week as a nice way to add more substance to the meal without just resorting to meat over and over again. I don't think we're going full vegetarian or anything like that but it is part of my effort to make healthier meal choices.

Tobie is actually our salad guy and he has a flair for mixing ingredients together to come with some interesting greens to go with our meals. He doesn't necessarily follow recipes as much anymore and instead gets inspired by this or that ingredient that we get to try that eventually gets incorporated into our food. This is how Tobie got into sun dried tomatoes and why I do my best to make sure that we always have a jar on hand in the fridge.

One of the best things about my life with Tobie is how we've both learned to cook. Before we relied on others to handle meal preparations for the most part and now we can do well enough on our own. I still get nervous as heck about even considering to share our food with other people, but at least Tobie and I certainly enjoy the food we have.