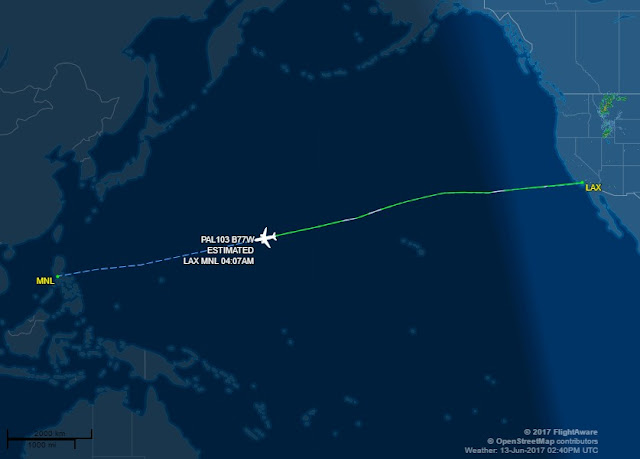 During our flight back to the Philippines after spending a few years in the US, my father tried to keep me busy by marking our supposed location during the flight thanks to those maps at the back of the airline magazine. I have no idea how accurate his estimates were but at the time it seemed brilliant and so I just nodded along.

Now the internet can do the same with with a relatively better degree of accuracy, although I'm sure it's just basing it off the relative value of how much time has elapsed since departure versus the estimated total flight time as compared with the total distance of the flight given this is the known variable. But slap the results of that mathematical computation onto a map visual and it looks a lot more believable than X marks scribbled on a magazine page.

There's an illogical part of my brain that wants to wait up until Tobie lands safely at NAIA, but that won't really help anyone. I still have to deal with work in the morning and Tobie will first need to get his folks settled at home before he can even think about making his way back to the Sietch. Excitement for his return is understandable but one needs to remain responsible as well. He'll be home soon enough and better to be well-rested and awake at the right time in order to welcome him home.