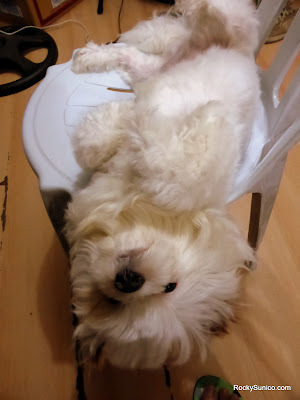 I had been dreading the social media inevitability of old photos of Yoshi cropping up on Google Photos and Facebook this week. For the most part it feels like I've been getting lucky with much older photos showing Yoshi in the peak of health. Today was the first time in a while that Google Photos had highlighted a photo from just last year.

The photo to the left isn't that photo. This is just a photo of a younger Yoshi being a quirky dog. The photos  that came up were from his last days when his kidney disease really started to get the better of him. It was a sad sight then and even more sad now since I know how that story ends. The same time last year we were struggling to keep Yoshi alive.

A year ago, Yoshi was dying. And I went down the rabbit hole of reading a number of my blog posts from that time period that captured some of my feelings and my increasing desperation. It was painful to re-live those times through my writings but then I'm also glad that I have that record. As sad as that week was, at least I have a record of our struggle. I have a  part of his story captured in words. Who knows what purpose it's supposed to serve, but there it is.

Reading those entries and looking at his old photos still makes me cry. Writing about Yoshi at length like this makes me cry. I miss Yoshi. I miss having a dog in general but I still miss Yoshi more.

So yeah I guess it was a little extreme to move into a BGC condominium that doesn't allow any pets in the whole building as a way of avoiding having a new dog just yet, but it does feel rather necessary for now.

I miss him and all his quirks and how he'd stay beside me long enough to help me fall asleep but not much longer beyond that. And I do feel his absence even more now that Tobie's out of town and I don't have anyone with me. I think I'd be able to cope better with Tobie's absence if I had a dog with me now. Ah if wishes were fishes and all that silly stuff.
aminals deaths inner ramblings sietch life Yoshi