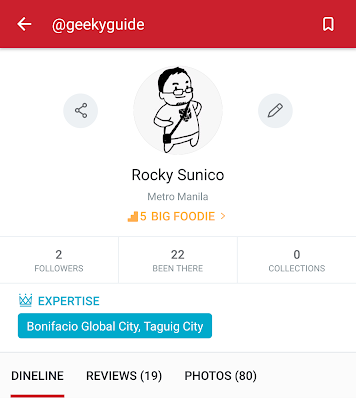 Today in minor non-achievements, I spend a fair amount of time last night updating my profile on Zomato and uploading photos to get more points or whatever. It takes 10 reviews and 50 photos to become an "expert" in a specific area and I ended up aiming for that given all the places we've eaten at in the area.

I have no illusions of the relative (lack of) value of this, but it gave me something to do. I write reviews for books, movies, TV shows and games anyway so why not some restaurant reviews, right? I doubt I'll get anything out of this but it's my little contribution to the community. I've seen neutral feedback from two of the restaurants that I've rated so far so who knows, right?

In other app news, BPI emailed a promotion for GMovies by Globe so I finally gave in and downloaded the app. I'm not sure when I'll get a chance to test the app out but it may prove useful. And it's hard to say no to P150 off a movie ticket so it's worth the experiment.

It's funny how Sureseats no longer seems as appealing or practical to me for reserving tickets. As much as I love Ayala Cinemas, the Sureseats experience is kind of terrible. SM Tickets is actually unusually more convenient as an alternative provided you're okay with watching a movie at an SM Mall. Maybe the GMovies app will help bridge the divide across the theater chains but I'm not holding my breath just yet.
blogging food adventures moving pictures sietch life