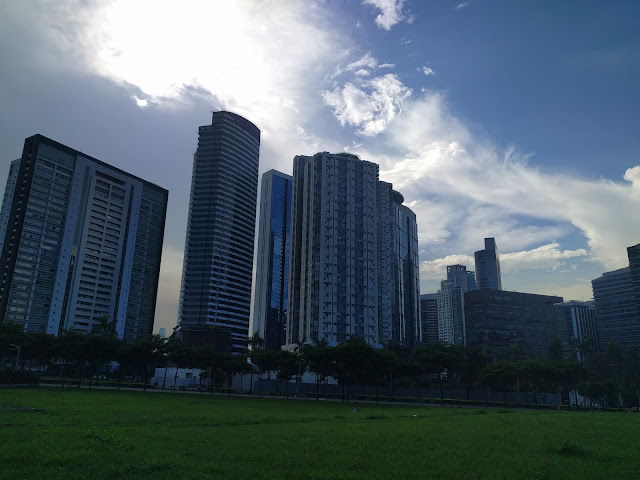 Today has been a rainy day in Metro Manila. Things culminated tonight with reports of flooding in certain areas and a lot of social media updates with folks complaining about the weather and getting stuck here and there.

As is often the case, it didn't rain all that much in BGC. Sure we were still in range of the rather unsettling thunderstorm that made for quite the intense light show complete with window-shaking sound effects. But in terms of actual rain, we didn't get all that much. It was enough to wet the streets and make the air feel a bit cooler. But by the time I walked home after dinner with the office folks, things were pretty dry again.

This seems to happen a lot - for some reason it feels like BGC has a separate climate from the rest of Metro Manila. It can be raining cats and dogs in both Makati and Quezon City and yet in BGC things will seem mostly overcast. This is not to say that I think BGC doesn't get any rain. It certainly does every now and then. But for some reason it often feels like the rain tends to be elsewhere and not here or only here and not so much everywhere else. Weird.

At least I didn't get wet during my walk home. And the weather was a bit less uncomfortable than normal, so that's also a good thing.
inner ramblings sietch life