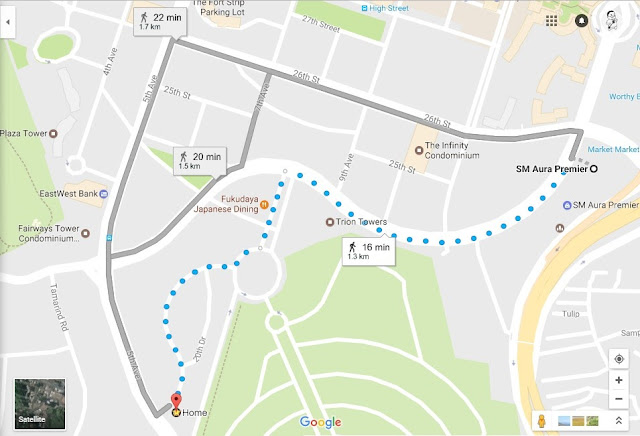 I really should try to walk more but any amount of walking outdoors is bound to make me sweat buckets whether I like it or not. That's a natural result of my weight combined with my low sweat threshold that I've experienced even as a kid. Some folks would say that I probably have a slightly higher metabolism, but my current weight pretty much refutes that point. But whatever, if I walk it means I will sweat.

So when I need to go somewhere that involves meeting other people like going to work or visiting my folks in the area, I still take an Uber even if it's not a very environmentally friendly thing to do. I don't even bother with UberPool since my trips rarely go over P100 unless we're talking full surge due to rainy Friday night traffic. But going home or just stepping out for errands I try to commit to walking instead especially since that means less stress for Tobie in terms of finding parking or dealing with the idiot drivers of the world.

I had a lovely walk home this afternoon after spending the night with the folks. Aft er being cooped up inside playing Dynasty Warriors 8 for an unhealthy amount of time, I figured walking was the right thing to do. I took photos during the walk and that was rather fun except for how quickly my phone's battery drains as of late. Oh technology you silly little thing.

Today I plan on watching Ang Araw sa Likod Mo given (1) a friend is starring in it, (2) it's received a number of awards from various independent film festivals and (3) the subject matter feels rather timeline in light of Marawi. I originally considered watching at Greenbelt so I could also pick up some theater tickets I had ordered but now I think I'll limit myself to Market! Market! Plus there may still be a service center that can look at my Nexus 6P and possible diagnose what's going on with my funky battery life.