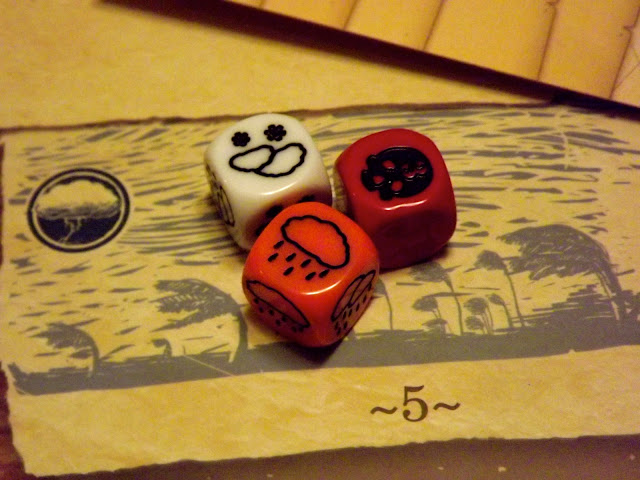 It's raining and I'm home alone waiting for a few players to come over for a board game night. It's tricky to figure out how many people to invite since every additional person means less possible games that you can play. Most games max out at four players and some can manage five and once you get to six players they tend to support up to 8 players and then it goes nuts into full party game range.

When it's me and Tobie hosting a game, that tends to mean we can only invite 2-3 players over since the 4-5 player range is a bit of a sweet spot. It also makes for a more focused environment for teaching rules to people when they're unfamiliar with the games. We rarely invite 4 or more players since that not only limits our game options but it's also the maximum capacity of our dining table. This is particularly critical for RPGs since everyone needs table space in order to play those games properly.

But then even when game nights are scheduled a month ahead, you still get cancellations. Now these are a pain and you start to consider possible folks to invite over at the last minute to round out the table. When I'm with Tobie its fine to just have one other player since 3 is a decent number for games. But since I'm alone tonight, I'm hoping to get at least two other people here so it doesn't limit our options too much. Plus it seems a waste of a game night if we end up playing head to head each and every time. If that's the case we might as well just watch a movie or play something on the PS3.

It's still raining and I know that's complicating travel for everyone tonight and I do hope people get here safely. I invited three friends over and one already had to cancel because reasons so now I'm down to two players. Cancelled player could still catch up super late if he wants to and I managed to invite another friend to buffer things but he's also a vague "maybe". So I'm really only expecting two players  but one has to travel from much further away so that's troubling too.