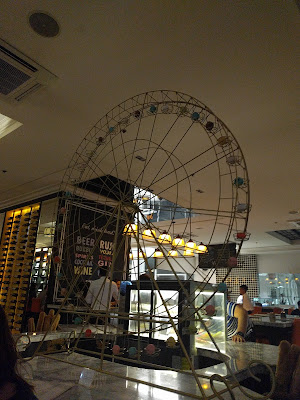 Despite having gotten to sleep past 03:00am, I woke up before 08:00am this morning with a bit of a sudden start. I don't remember a bad or striking dream that could have explained it and it wasn't even the sun beaming directly into my face. But it was just as well as Tobie had finally woken up from his post trans-Pacific flight and so we got to chat for a good hour before it was time for me to get ready for work.

With him on Pacific time, our overlap period is a bit bigger in the daytime as his day winds down so we still get to chat, and that helps a lot. But for the bulk of my work day and the time after work, he's not quite as available as he needs to be asleep. The Sietch can be pretty quiet when it's just one person there so I fill up the void with various TV shows and movies or whatever else I can stream to the Chromecast.

At the end of my work day I tend to joke on social media that I could be open to dinner. Tonight an opportunity came up when some of the ladies from the Finer Gaming Things Club had ended up with an impromptu dinner with some other friends over at the Todd English Food Hall at SM Aura. I wasn't particularly looking to eat at this place just now since Tobie and I hadn't tried it yet together, but then going out seemed like a better idea than eating more of the pasta that I had cooked a large batch of last night.

The food was good but not great and probably more expensive than it could have been. But that didn't really matter since the company was awesome to the point of being priceless. Sure the night still ended with me walking back home to the Sietch alone, but I didn't quite so lonely and that's a good thing. I'll certainly sleep well tonight given my lack of sleep and all the extra walking I did today.

And best of all is that Tobie woke up sometime during the post dinner conversation so we're back in contact once more. Soon I'll have to be the one to leave him to get through his day while I catch up on sleep, but at least we continue to stay in touch. Technology is quite a gift in this area. The joys of living in the future.
food adventures sietch life Tobie