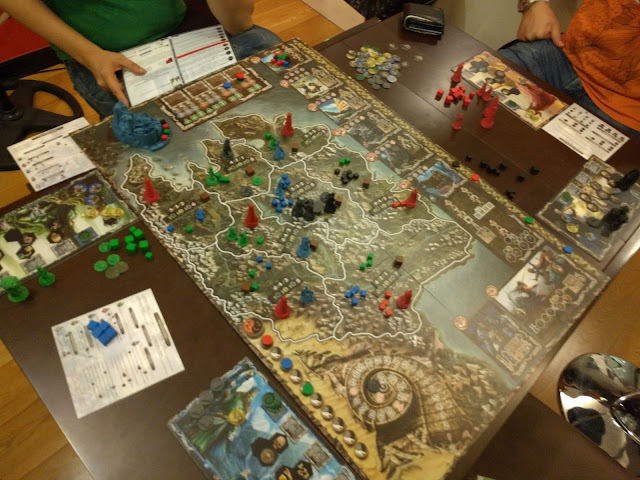 So by around this time tomorrow night, Tobie will be at the airport waiting for his flight to the US to depart NAIA. Although this is a PAL flight, so there's always the risk of fight delays and other the other usual complications when flying out of Terminal 2. And then he'll gone for a little over three weeks. Major bummer.

We've kept the weekend pretty busy and I think we made the most of things. We have board game nights for both Friday and Saturday and today we're finishing up a tabletop RPG session. We got haircuts and found time to find pasalubongs for Tobie's family and some of the guys he expects to see at the Gamex 2017 convention.

I'm super excited for Tobie since the trip means he finally gets to attend a tabletop gaming convention - something that he hasn't been able to do for quite a long time. He's had so many stories of his convention experience years ago and I'm glad that he gets to form new memories. Plus he's going to be able to meet up with many of his friends and even idols in the industry who seem equally eager to meet him in person as well. I regret not being able to go with him but I am super happy for and proud of him.

There are complications apart from the general sadness of him not being here with me at the Sietch. There are little things like how much food I should cook and how I'll be able  to watch our favorite shows since I do my best to wait for him before watching. We'll try to figure out workarounds while he's away but it goes without saying that things will be complicated. But time is just time and I expect things will blur by soon enough.

There are a few game nights scheduled while Tobie is away and maybe I'll hit O Bar a few times. I have lots of books to read and other non-Tobie TV shows to watch and movies I've been meaning to get around to. I have Transformers to unbox and shelve, Star Trek Starships to inspect and photograph and maybe I'll try starting a running routine. There are certainly a great many things that I can do to keep myself busy while Tobie is away but that won't mean I won't be missing him to bits every single moment we're apart.
gaming inner ramblings run the world sietch life tabletop gaming Tobie