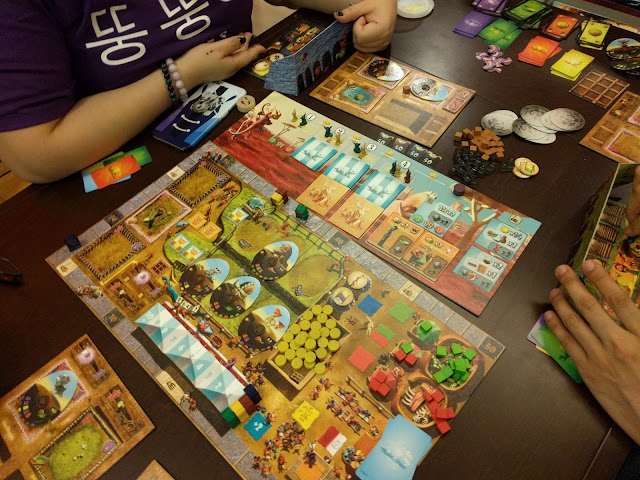 The last weekend before Tobie heads off to the US is a most gaming-filled one indeed. I suppose that's a proper enough send off short of a dessert buffet or something.

Last night was a quieter board game night that had us playing Imperial Settlers, Castles of Mad King Ludwig, Dead of Winter and Sushi Go! Party. It was a repeat game night for a Twitter friend and a first time game night for a Growlr friend. It was certainly a lot of fun and I'm glad we setup the game night.

After a last minute errand session to get more gifts for US based friends and haircuts for both of us, we've made our way to another game night, this time with the Finer Gaming Things Club.

Thus far we've played Dungeon Petz and Harry Potter Hogwarts Battle while games of Mythe and Through the Ages are still in-progress. We'll continue gaming until sunrise or thereabouts but it's definitely a fun night of gaming and eating.

Tomorrow we have an RPG session for our reboot DC Heroes group with Urim and Flip. Then it'll really be time to think about Tobie's trip.
gaming tabletop gaming Tobie