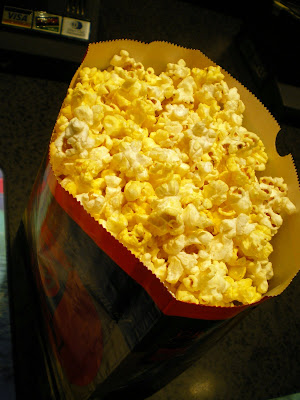 When you think about the impact of media on behavior, I think one of the more common ideas that come up would probably involve ads related to cigarettes and alcohol. There's a part of our brains that feels almost hardwired to consider a man smoking to be somehow hotter without considering the smell of smoke. Media plays with our brains in funny ways.

For me, I think one of the surest signs of media conditioning is my almost compulsive need to have popcorn whenever I watch a movie. This need is strongest when we watch movies at an actual cinema instead of just at home. It's a simple enough equation - watch a movie, have some popcorn. Even if most of the time most of the popcorn is gone before the trailers roll.

I find myself looking for popcorn even during those times when we have dinner right before watching a movie. Even a small one will do in order to satisfying that nagging feeling that something's missing. And friends  know I'm a guy with my fair share of little obsessions here and there.

What's more annoying is that it's not like I don't know why I look for popcorn when we watch movies. It's a practice popularized by the industry and reinforced to become something like traditions being carried over from generation to generation. But despite this awareness, it still happens.

To be it's not a completely terrible habit apart from encountering some rather disappointing popcorn variants out there along with whatever empty calories and sodium come with junk food in general. But it's still an agreeable activity and one that is part of the mystique of the movie experience I suppose. It's right up there with going out to watch movies on a Sunday and other such habits.
inner ramblings moving pictures