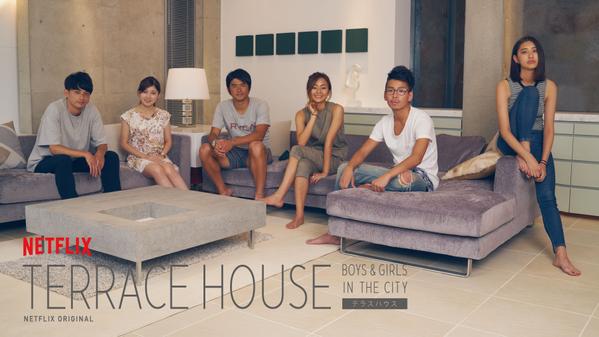 My dalliances with reality TV have been fairly limited over the years and usually it's Tobie who gets us to try out new shows to see if it'll click. While we don't follow shows like Survivor and The Amazing Race but we still follow Project Runway and of course RuPaul's Drag Race. We've ventured into weird shows like Face Off and Jim Henson's Creature Shop Challenge since our greater focus has been on creative ventures where the contests really get judged based on what they create or bring to the stage.

So why the heck are we watching Terrace House?

This is a rare time when I ended up initiating the gamble on this show. In my mind, the show had to be doing something right as (1) Netflix had acquired the rights to it, (2) it already has a spin-off series, and (3) with shows like Midnight Diner: Tokyo Stories and Samurai Gourmet, I've been really happy with Netflix's Japanese partnerships. But what really made the show blip on my radar was when PBS Idea Channel ran a feature on the show, which really means that Terrace House is enough of a thing to merit scrutiny. Another friend mentioned the show on Facebook and that just pushed me over the edge. So here we are.

At the start of the show, it's described as 3 guys and 3 girls living together and there's absolutely no script. Unlike most Western reality TV shows, there did not feel the need to isolate the contestants from the rest of the world. So they still go to school or work and they still worry about income.

What really makes the show kind of bonkers by typical Western reality TV standards is the fact that it reaches a point where the people in the house get to watch episodes from their season. What's more, people eventually choose to exit the house but replacements are brought in to maintain the balance of 3 girls and 3 boys. And these are also people who have seen the show and thus have some knowledge of some of the housemates based on episodes that have aired.

Then you have the odd element another group of 3 guys and 3 girls who are watching the show and providing commentary. Instead of one-on-one confessionals by housemates to some camera, instead we get these people outside the house commenting on everything. It's like Mystery Science Theater 3000 but without the robots. So I get why Idea Channel described the show as being rather meta and with a Let's Play video feel to things.

Japanese life can be pretty fascinating and the seemingly odd politeness of these housemates talking to one another about their romantic advances to other housemates. And with such a small group, you'd think they'd butt heads more, but they don't.

And they eat so much sashimi! Envy!

Housemate Tobie and I both found most attractive has been Arman (of course!) but funnily he's not quite as popular among the women in the house. Our absolute favorite character so far is Natsumi "Nacchan" Saito, who is just wonderfully authentic and sincere. Plus she's a bit of a neat freak, and I can totally get on board with that.

We're more than halfway through this first show and it's quite the enjoyable ride so far. It's tricky to keep up with a show with subtitles but hey the resulting stories of these people living together does make for some compelling television.
sietch life television Tobie