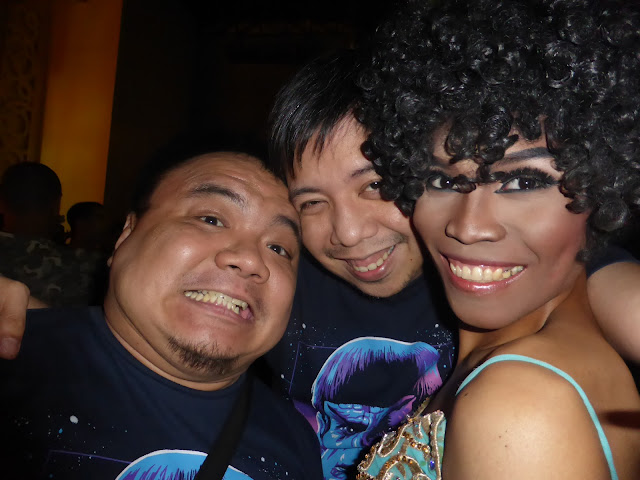 So last night Tobie and I had a great time at O Bar with a few other friends to celebrate his birthday. As much as his actual birthday was last Tuesday, a celebration at O Bar with our friends there remains a sort of obligatory part of any proper birthday. And we're obviously big O Bar fans in our own right and we love to celebrate our best moments with them.

Plus it was also the delayed birthday celebration of MC, one of the fabulous Oh Divas. And with a drag queen celebrates her birthday at O Bar, it means she gets to feature more numbers that she enjoys and thus we got a lot of powerful Janet Jackson and Whitney Houston performances that really brought down the house.

But at the same time there were series of Kylie Minogue numbers that were clearly for Tobie's benefit and we were all pretty happy about that. Not that we didn't enjoy the other numbers - there were so many good things about the performance line-up that we were grinning and singing along pretty much from start to finish.

Most of our fellow O Bar regulars that make up our sort of extended family were out of town for the usual beach time that comes with Labor Day weekend but the bar was still pretty crazy with everyone else who did not leave Metro Manila. And we still had some key friends including actual members of the core O Bar team present and that's really all the company that we needed for the night.

Now we're about to leave for an RPG night at a friend's place and yet another part of Tobie's extended birthday celebrations for the week. And he totally deserves to have as much as possible because he's just that sort of a guy. Only the best for the man I love! <3