02406: Looking Back at Archer's Birthday 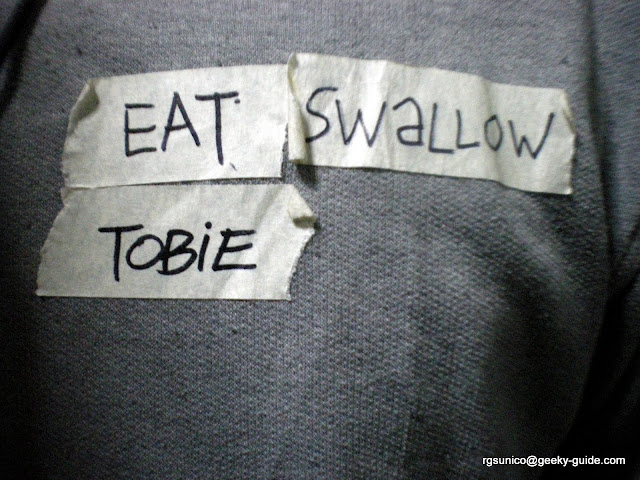 Today is Tobie's birthday and we both went to work! But we did have our own little celebrations last night including adding the term "birthday" to everything like "Here's your birthday groceries!" or "Let's read your birthday emails!" and all that fun stuff. I had a special electronic gift as a surprise that I had hoped to trigger after midnight but instead it went live like 5 hours after I had purchased the item so I guess you can't win them all.

I was considering digging up my original blog entry about my first in-person meeting with Tobie but I had already posted that as a feature about NetRunner Night on Baduy Pride.

So instead we'll revisit what I wrote in 2009 about that weekend with Tobie when he was still "Archer" in my old LiveJounal blog posts:

So yeah, it was a good Saturday. Beyond that I also came out this Saturday, but in a different way, admittedly.

During the Yale party, my Archer and I decided to finally come clean and tell everyone that we’ve been seeing each other as more than friends. It’s important since we all share the same set of geek friends and admittedly we were worried that this would somehow be met with negative reactions or perhaps even something along the lines of disgust given I had just broken up pretty much a week ago. It’s like giving birth less than 9 months after getting married - it adds a slightly bad color to the whole affair since everyone starts doing the math and thus raising eyebrows. You know what I mean.

In the end, it was a lot less surprising than we thought and the geeks were mostly all "we kinda figured" and seemed to be generally happy. I have to admit, I’m pretty relieved about all this and just glad that we got to enjoy the party not just as geeks but as, well, whatever it is we are. It’s still a tad too soon to say that we’re completely, officially and technically together as a couple, but we’re definitely a recognized item. Some geeks had some really great things to say in response to our not-so-surprising revelation, and my heart goes out to all of you for making us feel welcome and accepted in this regard. I know, normally I’d rattle off something about not caring about the opinions of others and needing to love oneself and all that, and all that still holds true. However when it comes to the geeks, who are like a second family to both of us, it still matters that things remain clear and honest and most of all real. I love you guys!

My apologies for all the PDAs at the party - I guess we were just so happy and relieved to have that particular cat out of the bag. Yeah, this especially goes out to [3]Lynn, who had the uncanny knack for being right beside us whenever we’d go for a kiss, haha.

I’ll have to blog about him as my Archer for now - the challenges when still in the closet and all that.Don’t mistake this for not being proud of him or being involved with him, since I am. This entry is probably the best way for me to do so for now. At least all you geek friends know who I’m talking about now and who’s been one of my main pillars of strength in recent months and the same goes for closer friends of mine that I’ve had the chance to talk to. I just hope you kinda respect the need for pseudonyms for the meantime - we’re getting there, don’t worry. I just wish I had a wittier pseudonym for him, haha. It’s more functional than creative and it oddly reminds me more of Fate/Stay Night more than any other geek reference. Oh well.

Hay, and this is why I’m so happy these days despite everything else.


And Tobie still makes me extremely happy every single day with our quiet moments at the table or his random gifts of corn. And I can only hope to make him even happier in turn in our crazy, geeky life.