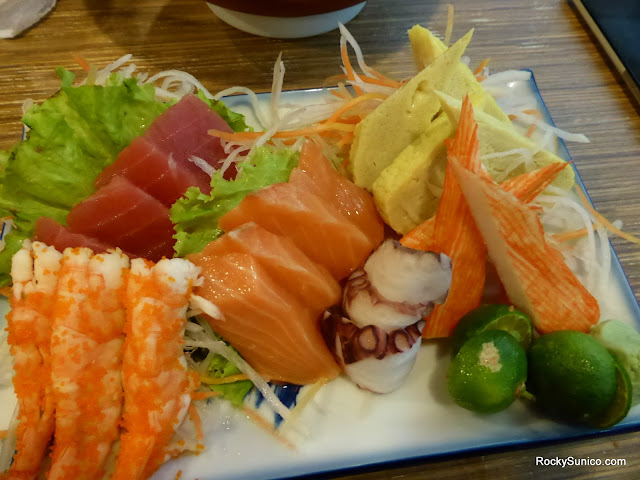 In line with yesterday's post, let's try writing something a bit more conventional? Or at more like something contemporary.

I just want things to be fair.

It's not easy to date when you're not obsessive compulsive like me. It's simple when you order separate plates and you respect the invisible boundary between the two off you. But some meal experiences are meant to be shared - it's the sort of dating move that is meant to get the two of you closer together. But man, it can be such a nightmare.

I love sushi - or more specifically I love sashimi, which is the raw fish or whatever that isn't served sitting on a portion of rice. But sooner or later you end up on a date with a guy who thinks that it's a good idea to get the sashimi platter to share. And oh my gods that is a nightmare when you just want things to be fair but here comes the waiter with a plate that includes 3 of each variant of sashimi. I do love sashimi enough to endure this, but it becomes a moment in the date when we have to discuss things.

"I'm not obsessive compulsive or anything," I usually begin once the waiter has left, "but how do you want to divide this between us?" This question normally gets a cautious stare. Sometimes I get a laugh. But I never laugh - I'm completely serious about this. We need to come to an agreement as to how things will be divided.

Thus begins the complicated dance of the relative "value" of each item on the plate. In theory the tuna and the salmon are of relatively equivalent value and can be negotiated. Crab sticks are often of the same level as egg, but it depends on the person. The octopus, shrimp and squid pieces tend to be of similar value but it's harder to work things out. The mackerel or whatever related fish is hit or miss - it depends on how well it was cooked and if it smells too fishy. The sea urchin is also complicated since it's a blob of yellow on the plate. Sometimes I love it when it's super fresh and clean tasting but other times it's overly salty and fishy. But I won't know unless I've tried it already or I've been to the restaurant before.

By the time we've worked something out, I can't help but feel a little ashamed of myself even though I know I shouldn't. After all, I'm not obsessive compulsive so there's nothing to stress about, right? But there's definitely something that feels odd about almost "imposing" my way of thinking on other people. If he's cool with it, then maybe there's hope for us. More often than not I just feel bad and I look up into his eyes and I see that weird look of judgement that comes after negotiating a plate of sashimi in this manner. Internally I beat myself up for initiating the discussion but I can't help it. It just feels...right. It's the right thing to do.

Sharing a sashimi plate is a test in itself. And when my date reaches for a piece before I can initiate this discussion usually means a quick end to the my hope for things. We all have our standards after all, right? We have to draw the line somewhere.

And thus I save either the tuna or the salmon as my last bite. That always helps make the night feel a little better no matter where my date and I end up.
food adventures writing