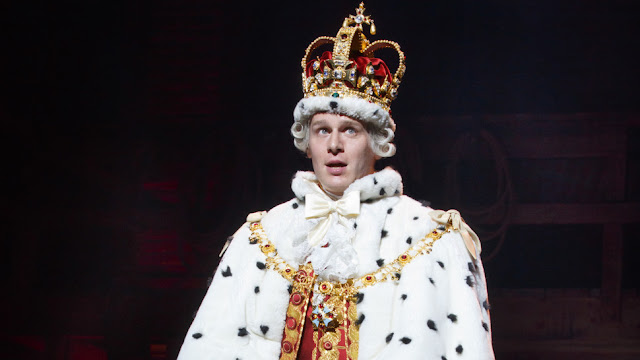 It was only recently that Tobie invested some time to listening to the soundtrack of the musical Hamilton and it was King George that finally sold him on the play. Admittedly it wasn't just about the quirkiness of the character with respect to the show but also how much he reminded us of an NPC in our 7th Sea Game - this being the King Emperor of Montaigne. And keeping that concept in mind makes listening to the musical all the more fun and vice versa.

It's still crazy to consider that America's most popular musical at the moment is one about the life of the first Secretary of Treasury of the United States of America. It's such a dry and seemingly mundane topic on paper but of course the best musicals use the magic of theater to breathe new creative life into just about anything.

I was thinking about the writing process that went into the show during my walk home tonight and as with many things of late that had me thinking about my recent writing efforts. If Lin-Manuel Miranda can make a wildly  popular musical about a historical figure he loves, why can't I write a few decent stories, right? I just need to find a subject that I'm highly passionate about. And there's the rub.

My geeky passions are definitely strong ones, but my fandoms are of course franchise properties and it's not like I want to write fan fiction for the rest of my life or something. And I guess this is where my concerns about sounding like I've just copied the work of others stems from since a lot of the things that I write will inevitably draw inspiration from other shows and books that I like. I remind myself that there's nothing new under the sun but of course it's hard to shake off the feeling of being somehow derivative in my writing.

More excuses I create for myself not to write.
all the world's a stage cultural victory inner ramblings writing