02385: Daring Tales of Adventure and Heroism 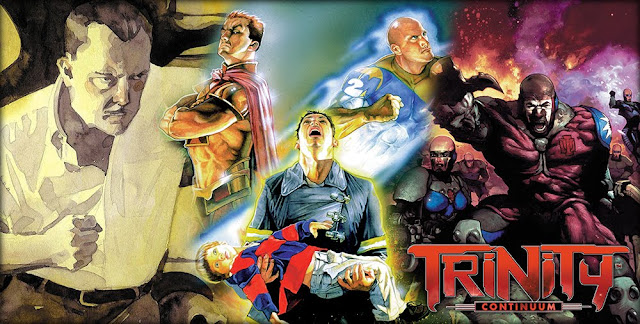 While in the middle of mapping out a character for an upcoming Scion game, my brain wandered back towards the Trinity group of games, these being Adventure, Aberrant and Aeon Trinity. Of the three, I really, really love Adventure most of all given the game unlocked a love for pulp stories that I did not realize that I had. We've played the original system a few times and they've generally been really positive gaming experiences.

The length and breath of the story of the games is actually very wide in scope. Aventure is a pulp story in the past while Aberrant is a superhero story in a period that resembles the present modern day while Trinity is set in the distant future. All three games involve people with special abilities. And the three have a core story that is nicely interconnected over the years.

I can't quite put my finger on while I enjoy this game setting so much considering I've only had a chance to play through the various game like 2-3 times only. But I guess  it's just how nice how diverse the story settings are and how rich in flavor the games end up being when you're playing them. Sure, you still need to have a good set of players gaming with you in order to come up with truly good stories but on the whole there's just so much fun to be had with this family of games.

There's news of the systems being updated by the folks at the Onyx Path and I don't want to dig too deeply into whether or not the games are going to come out the same way. But it is nice to note that there's enough love for the system to want to keep it alive in this manner.

First we need to get through Scion and a few other games. Then maybe the time will come to play in the Trinity Continuum once more.
gaming tabletop gaming