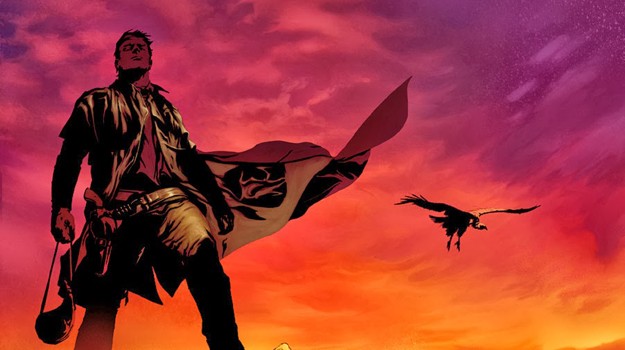 I'm in the middle of reading through the various titles of the Before Watchmen series of comics. The books act as a prequel to the highly popular Watchmen comic book series by Alan  Moore and cover the stories of the individual heroes before the events in Watchmen. It's obviously a great opportunity for further developing the character stories behind these now famous characters but it also means a lot of weird stories also introduced into the universe.

I was take aback for a moment once I got to Before Watchmen: Ozymandias as it features art by Jae Lee. I only became familiar with his art through his work on the various comics in Marvel's The Dark Tower series and thus I had become quite familiar with his art style in those books. It was nice to see his work again in Ozymandias and the emotions his art evokes seemed perfectly in line with what the sort of story that the book was telling.

Maybe it's because of how I encountered him in The Dark Tower comics, but I tend to find his art style to be inherent somber to the point of being quite sad or maudlin or other adjectives of this dreary nature. But the despite the often grim or serious tone to his art, it's also quite beautiful in a manner that is subtle and striking at the same time. And I guess that's why it sort of jumps out to me when I encounter it.

It's funny how I describe his art to be beautiful since a lot of times the way he draw faces seems a little inhuman to some extent. He has a way of twisting features to make people seem just a little off but in that manner also more human given the flaws and blemishes. And I think that's also why I appreciate this work as a way of conveying stories of fiction, especially stories with a fantasy bent. His use of color for backgrounds and creating textures and shades is a thing of wonder and his work helped me love The Dark Tower comics even more than I had originally as a fan of the books.

And while the stories of Before Watchmen remain rather confusing at times, Jae Lee's art remains a great reason to continue reading.
books comics inner ramblings