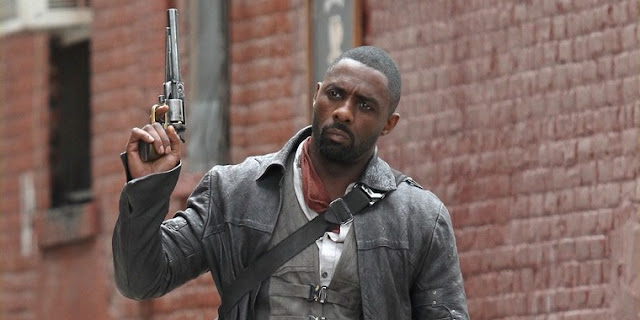 Given the on-again, off-again news of the various efforts to adapt Stephen King's The Dark Tower series of books into...something, I've largely tuned out. First J.J. Abrams was attached to the project but then he let it go and Ron Howard tried to join in the fun. He had a big vision of a multi-movie project with several seasons of a related TV series in-between it all. But even that project shut down.

Now we're down to Nikolaj Arcel, who has directed a handful of movies that I've never heard of. The first poster got me curious enough to look into the movie and what I'm digging up about the project already unnerves me.

I have no problems with Idris Elba as Roland Deschain - he actually seems like an interesting, bold choice. I am concerned about Matthew McConaughey as Walter Padick, another incarnation of The Man in Black. But that's not the biggest problem.

The big problem is that this latest movie adaptation is being positioned as a sequel to the book series. But it's the sort of sequel that seems to be a soft reboot that doesn't really factor in the character progression of the original series. Plus the whole project was fast-tracked by Sony Pictures in obvious effort to capitalize on the movie rights before they lapse as the project has been floating around since 2007 or so. Plus I don't think we'll even get to see Roland's full ka-tet based on the cast list thus far sso what's the point, right?

This movie is starting to look really bad. At least the American Gods still looks good.