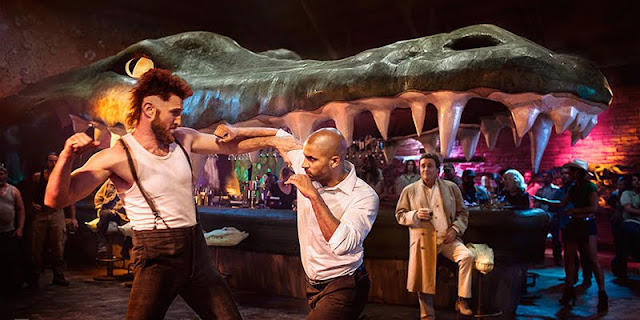 On my walk home I started to listen to my Audible copy of the 10th Anniversary Edition of American Gods by Neil Gaiman. My brief walk from the office to the house barely got me past the foreword by Neil Gaiman himself, but perhaps it was enough.

American Gods is of my favorite books - perhaps my favorite among all of Neil Gaiman's books. Reading the book did something for me - although it's hard to put into words. Versus all other authors, Neil Gaiman is the one who most inspires me to write. And this is the book that set my brain on fire when I first read it. Listening to the words of the book again as read from a version of the book that is 1200+ words longer than the version I had first read and had fallen in love with. I can't remember the last time I had read the book. It has been a while.

I haven't really written creative stories of considerable length in a while. I've had a few start and stop writing spells, some of them featured on this blog, but nothing has really stuck. I think my last big idea for a story lives all the way back in my school years but I never got around to finishing it. I've tried revisiting it over the years but it just never seems to stick. It never feels right.

I know the shape of my "writer's block" as it were - it's a heck of a lot of fear. Fear that the story will not be well-received. Fear that it'll sound stupid. Fear that I won't like it at the end. Almost every book or article about writing stresses that one should just write and ignore those fears and yet I've never really done so. Instead I've stayed in the comfort of the expository or personal writing of my blogs and not my else.

I think my biggest fear is that I don't think I have a novel enough idea to write about. At the end of the day any good book as a core concept that's easily explained when someone asks what the story is about. And I don't think I've ever felt like that I've had that sort of a concept in mind. The one big story I came up with was meant to be back story of a proposed Magic: the Gathering expansion as part of contest in InQuest magazine. In the years since I've had story prompts like "I want to write a story like American Gods" or "I want to write an LGBT story with a Queer as Folk sort of vibe." These ideas don't sound all that solid - or all that original.

American Gods is about the lives of gods in modern life, living in a land far away from their point of origin. Chew is a comic book series about a man who gets psychic impressions from whatever he eats. The 'Mancer books are about magic born of obsession. The Nexus books are about a sort of OS for your brain and the rise of trans-humans. The Tao books are about aliens who have been secretly manipulating all of human history in line with their own conflict. The Wicked + The Divine is also about deities that are resurrected time and time again.

Those are all great ideas. And yet none come to me. I don't feel that spark of inspiration. I don't feel like I have an idea worth exploring through writing. Am I not creative in this manner? Can I not come up with something original and instead am I limited to innovating what is already there? Sure, one can bring up the argument that there's nothing new under the sun when it comes to stories, but I still want an idea that I can be proud of. I want to write a story that excites me instead of just writing one.

Maybe revisiting American Gods and Neil Gaiman's other books will help me. Maybe I need something to re-inspire me to explore this part of my brain more. But I do want to write. I feel that urge every time I read a good story. And after sprinting through Chew this week and listening to American Gods now, I definitely feel like I want to create something.