0237B: Gotta Get Back to Samurai Jack 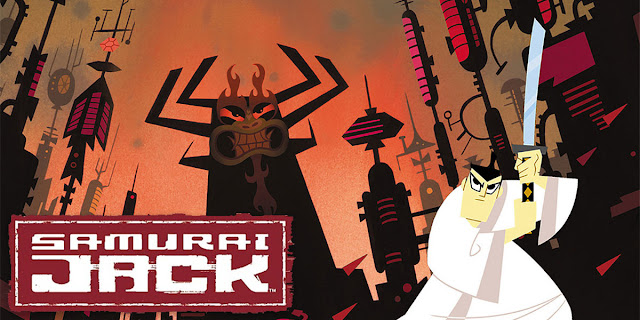 The one mythical fifth season of Samurai Jack has started to air on Adult Swim, addressing a void left in many of our lives. This cartoon was unlike anything else we had seen before on a  US network - an epic primetime cartoon that tried to tell a serious story. It was something that kids could watch given it managed to meet such standards for TV but at the same time it had story that was complex and rich in meaning that could be appreciated on a different level by older viewers.

And lets face it, Jack is just awesome.

I was tempted to just dive into the new series given its debut recently but then it started to nag at me that I had never finished watching every single episode. I had made sure to acquire a copy of the series before and Tobie and I watched a few episodes but one thing led to another and we never got around to finishing it. We've agreed to rectify that now and so our Samurai Jack extended marathon as begun. We don't exactly have a lot of time to watch but what time we do have we'll try t invest in this manner.