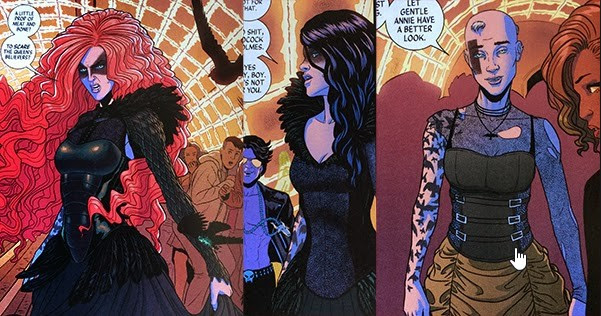 This week has been pretty crazy, especially on the work front. There's just been so much going but we got through our deadlines without going entirely crazy. But despite the joys of that rush of accomplishment you get after hitting send on your last email, I'd be lying if I said that I wasn't eager to get home for a somewhat last-minute RPG one-shot game that we had managed to cobble together against all odds.

The RPG tonight as a very quick one but a fun one. It was somewhat horror inspired and it had us facing demons and dark sorcerers and all that fun stuff. Despite being a more knowledge-based character but obviously I was drawing more from the likes of Harry Dresden. I think I can totally rock a Dresden game now given how far I've gotten with the books. Something to think about.

That reminded me that we're also planning a one-shot Scion game, which had us thinking about triple deity myths. The Morrigan is an easy favorite and everyone knows the Fates and their various incarnations. But then there are also other variations like the Hindi gods that are worth another look. So yeah, that will be another opportunity to play characters using popular fiction as an inspiration. I'm that that part of The Might Thor comics when the All-Mother comes into the mix of things, which is another triple-deity situation.