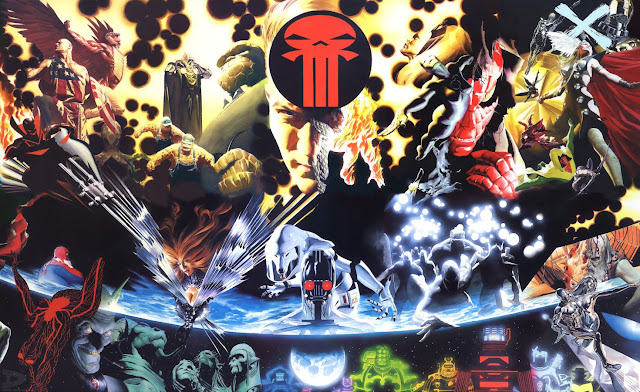 So I finally finished reading Marvel's Earth X, something I had delayed for some time because I was honesly worried that this was just going to be a rehash of DC's Kingdom Come or something. I blame the beautiful Alex Ross cover art for driving that impression, I suppose. And this comes at a time when I had just finished reading DC's Convergence story, which was quite a mess.

The challenge of imagining a grim future for the Marvel Universe is quite a feat under any circumstances but the resulting story that Jim Krueger created based on Alex Ross' notes is quite phenomenal. As much as there were inevitably confusing bits and complex plot elements brought into the mix of things, the final story is beautiful to the point of elegance.

The way that they reimagined how various Marvel heroes would be by projecting future concepts for them could have gone terribly wrong. Instead we got a fully realized universe with interesting character stories for the grim dystopia beyond and also quite the mystery tale as we as readers are walked through the grim future as events are revealed to us out of sequence. It's quite the story.

So this is me saying that I really enjoyed the tale and I feel better as a comic book fan for having read it. And not all stories  make you want to come out and say something like that.
books comics